I'm not a Three Speed Historian nor do I intend to become one. That ground is well-covered already at Retro Raleighs, The Raleigh Lenton, the Sturmey-Archer Historical Hub Archive and Sheldon Brown's Three Speed and Sturmey-Archer Hub Pages and I don't intend to reiterate it. However, ignorant though I may be about all the details and intricacies of the bikes, I think they're pretty cool and am running a few pictures of some Three Speed Tour mounts here. 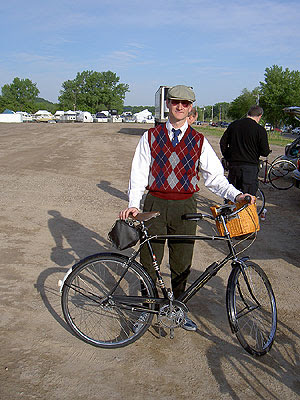 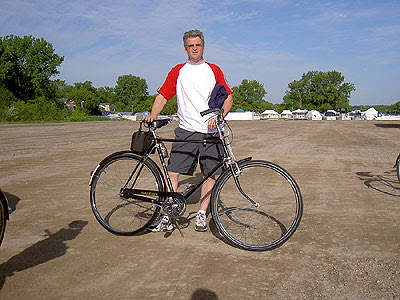 Patrick Persons with his Raleigh. A neighbour of his was throwing this out, Pat rescued it and cleaned it up and it's beautiful. It's also big; one of my problems is finding bikes big enough, and this one is getting close. Patrick's a normal-sized primate, but those are 28" wheels on this bike so he looks smallish. 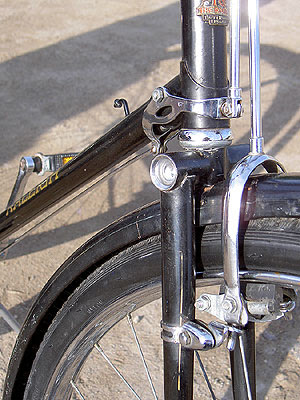 Patrick's Raleigh has rod brakes. No pesky cables! As you can see, the brake blocks pull up into the inner face of the front rim. The shiny metal collar around the bottom of the head tube is the linkage to the rear brake.

Pat's wife Becki was along too. She had a beautiful red Dunelt. 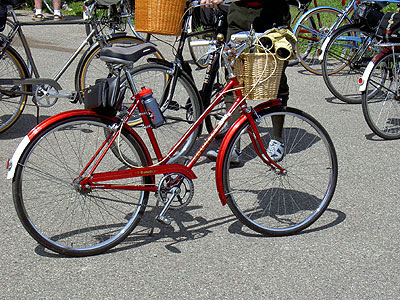 Apparently Patrick saw this in the front window of the Hub Bike Coop one day and stopped in and bought it. 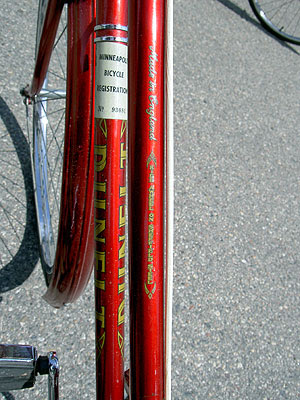 It's tough to read, but the lettering on Becki's Dunelt reads (and do this in a northern English accent) "Ride Awheel on Sheffield Steel". The "Awheel" would be the dialect's prononciation of "awhile". Sheffield is where "The Full Monty" was set, if that's any help with the accent. 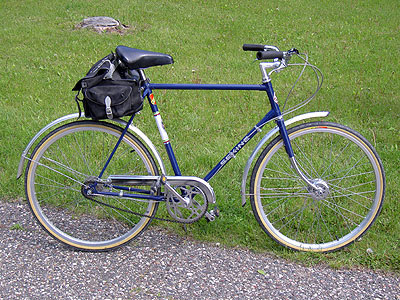 Tom Majure from Winnepeg came down and was riding a Canadian Sekine three-speed. Sekine, a Japanese company, built these in Manitoba in the early 1970s to evade Canadian tariffs on imported bikes. Apparently CCM, a big Canadian bike maker, whined about this and the tariffs were imposed on Sekine (and others) anyway, so they shut down, then CCM went bankrupt despite the reduced competition. I had a CCM bike when I was a kid in Toronto. 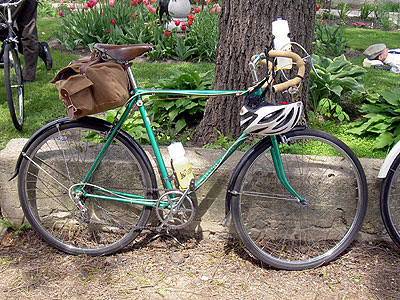 Hey! Is that a derailleur? Shocking! Although it's ok, it's original, it's a three-speed hub with a derailleur to shift between two cogs, giving six speeds altogether. This is a Lenton. 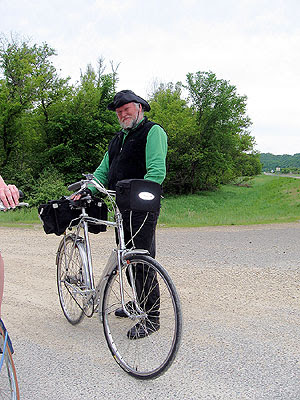 They weren't all three-speeds. This chrome beauty is a five-speed. I don't know the specific hub, but it had two shifters. One was the usual three-speed shifter with the cable going into the right hand side of the hub, the other had a cable going into the left-hand side of the hub. This second cable gave an extra-low and extra-high gear (and a direct drive, so it only added two speeds, giving the five) in addition to the three regular speeds. This rider (and I didn't get his name, but he's from Indiana) said the hub was finicky and he wouldn't use it in everyday riding, only for special things like this ride. Another rider with the same hub had a dissenting opinion, saying his whole family had bikes with these hubs and his wife's everyday bike was a Sturmey-Archer five speed.

This bike was not produced as a chromed frame, it was done later. The headbadge was completely chromed over, for instance. It was like this when this guy bought it, though. 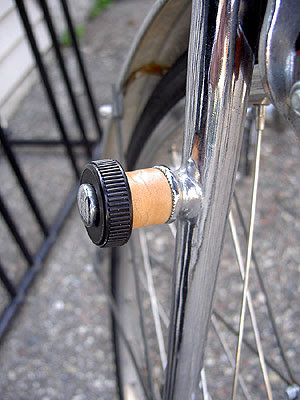 The bike had a non-original stud on the front fork to mount a light. It looks suspiciously like the cork from a bottle of whiskey to me! Of course, it's also on the wrong fork blade for American usage. 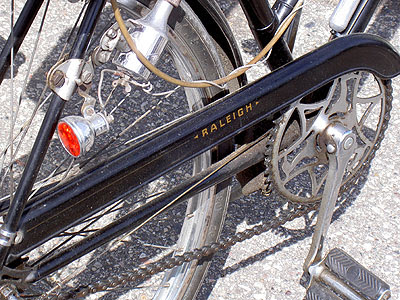 This rear light is also on the wrong side for this country. This is a pretty common light and dynamo arrangement. 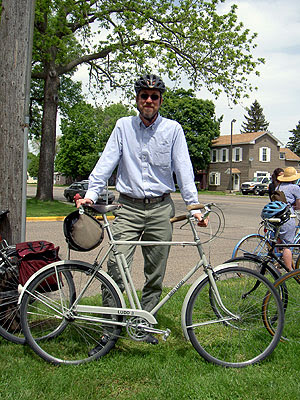 Finally, a Raleigh that's been repainted. The Ned Ludd refers to the Luddites who protested against the mechanization with the Industrial Revolution. This bike is a Rustoleum paint job and looked pretty good. I believe this chap's name is Bob.
Posted by Matt at 5/22/2006 11:15:00 PM