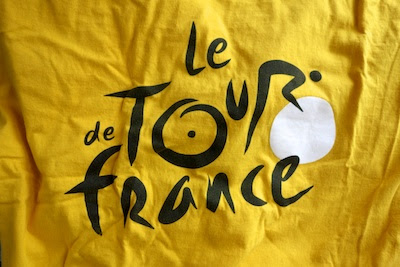 To be clear, I don't really give a rat's ass about bicycle racing. I don't read Velonews, I don't follow local clubs, I've never raced (I'm too slow, for one thing) and I don't care that much. I have met Lance Armstrong, 7-time winner of the Tour de France, and that was kind of cool because he's so famous, but he also personifies the problems with the sport and this event, that the podium results are just sort of tenative until all the drug results come in, sometimes years later.

Having said all that, I really like the Tour de France. Oh sure, the competitors are all drugged up, they just haven't been caught yet, and they are super-specialized physiques just like champion athletes in any big-money endeavour, but I like the team interplay and I really like the television coverage.

Really liking the television coverage used to be a problem because we don't have cable and the Tour used to show on Outdoor Life Network and then Versus, lesser cable channels, relegated with other minor sports like bass fishing and the National Hockey League. The Riverview Theater in Minneapolis would do free shows of the coverage on weekends, but that meant riding over to Minneapolis and getting all the stinking Subaru ads at full size, too.

Now the Tour is on NBC Sports. We still don't have cable, but for the last couple of years and again this year they've offered an excellent iPhone/iPad app. I highly recommend this. It's $15 for the whole Tour and has live video with commentary and, best of all, no commercials!

This is close to the end of Stage 3. Blue Shoes Guy won't win the stage. 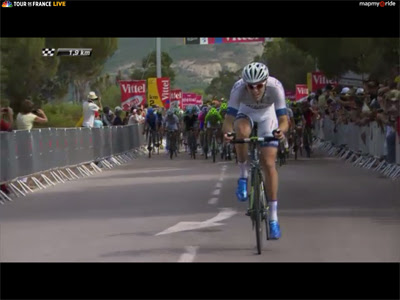 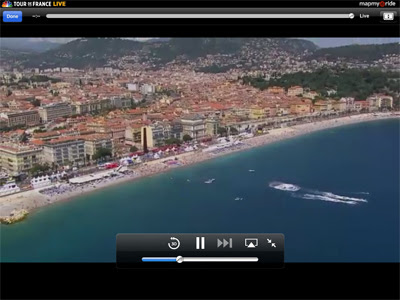 The first three days of this year were on Corsica, a place to which I'd given just about zero thought up to this point in my life, but which I'd now like to visit. The French get into this coverage, too, and in this case I was wondering what those guys were up to in the water. Fortunately, the heleecopta zoomed in for a closer look. 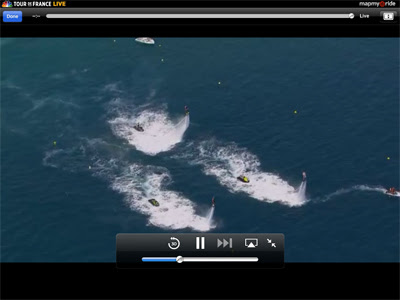 Now, this app (also available in Android) does a couple of things. First, if you're at work, you can have your iPhone next to your computer and keep an eye on the Tour while looking like you're working. You might want to watch your data consumption on this. The other thing that's pretty cool is that, if you have Apple TV, you can Air Play the broadcast to your regular television and watch it full size. It's brilliant!

Meanwhile, the estimable BikeSnobNYC blog had a comment by wishiwasmerckx which captured the essence of TdF coveage, so you can familiarize yourself with the commentary. Study this list and you should be able to pick up the action in an instant no matter what time you tune in to the coverage of Phil and Paul.

A brief training exercise for watching the TdF:


Tapping out a rhythm... Turned himself inside out... Open up the suitcase of courage... He's in a spot of bother... Oh, my, he's ridden into the carpark... The colored fellow... He'll be paying for this effort tomorrow... That chateau was built in 1547... One by one, he's peeling away his competitors, and now he's all alone on the slopes of... The riders will have to look out for that traffic furniture... There's a dangerous left-hand corner less than a kilometer from the line which may cause fits for the leadout trains... I'm hearing on race radio that there has been a crash at the 135 kilometer mark. We don't know if any of the favorites have been swept up in it or delayed... And the team car has sent several of his teammates back to help him chase to catch back on. He should have no problem reaching the back of the peloton... What an unfortunate time in the race to have a puncture... The race comissars have ordered the team cars out of the gap, and our computers are telling us that the breakaway should be caught with about 12 kilometers to go... He's racing like a man possessed...


And just yesterday, there was Phil (an Englishman) saying about Stage 3 winner Simon Gerrans, who won in the final sprint against Peter Sagan by about 5 inches: "I'm told Gerrans speaks English. He's Australian, so we'll see."