It's been pretty miserable out the last couple of days. As a Practical Cyclist, it would be nice to ride around in street clothes and not look like a cycling doofus while off the bike, just like those folks in, you know, Amsterdam. You can do that here, in May and October, but days like today cry for separate clothing. Here's the temperature in Saint Paul right now:

I think their climate and terrain is better-suited to riding the bike everywhere in street clothes. Me, I've been riding to work and showering and changing there. On less-tropical days, I'll ride and just change with a damp mop, but this New Guinea climate isn't going to work for dress trousers, pressed shirt and tie.

I'm guessing that in 6 months I could run the same entry, entitle it "Bloody Nippy" and show our biting cold versus the relatively balmly Amsterdam weather.
Posted by Matt at 7/25/2007 09:20:00 PM No comments:

Your Tax Dollars At Work

Last Saturday was something of a novelty, a day free of obligations. For the last year and a half there have been pressing priorities, resulting from my father's deteriorating health, the decision to move him to a nursing home in northeast Iowa near one of my sisters, the need to move some of his possessions up there from Des Moines, to deal with the rest, to work on the house and sell it, to host his sister, my aunt, visiting from England. Much of this weighed heavily this past spring as my cycling buddy Paul and I worked on the house, starting in February, stripping wallpaper, ripping up carpet, painting, jacking up one settling floor, changing locks, all the details of an older house's need four hours from home. My last trip down was in early June and the house got listed, but then it was the bike races, not an obligation, but another event in a crowded spring.

It came to closure this past few weeks. The last Thursday in June my aunt arrived from the UK for her visit; the next day Dad's house sold, and I no longer had a real estate interest in Des Moines. Margaret's visit was two weeks long; as soon as she left, my mother in law arrived for a couple of days. She left, and a weekend loomed up with no obligations. Happily for me, the latest Harry Potter book was arriving. Henry rode up to the Har Mar Mall bookstore for the party and to buy the two copies we'd reserved; he rode home about 1:30AM and the next morning the household plunged into Pottermania. Nobody was even going to notice if I were gone.

I rode off east to start with, following a ride mapped on Map My Ride. It's 20 miles and passes near the house, so I thought I'd follow the eastern bits, not all of which I've ridden. I did this, riding down Summit to the end and decided I didn't want to go home yet, it was a gorgeous day and at home would be hungry cats and oblivious Potter-obsessed humans. I rode across the Lake Street brigde and up to the Midtown Greenway, and headed west.

At Hiawatha I was pleased to see that work is progressing on the bridge over Hiawatha, which will circumvent the current level crossing. Not only is work progressing, they were working on this lovely Saturday!

Your Tax Dollars At Work I 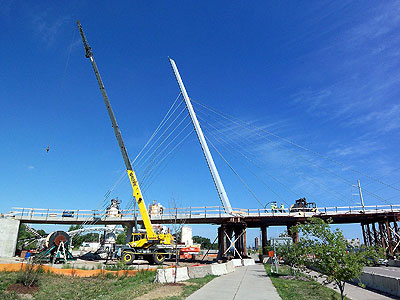 The cable support and crane for the Hiawatha Bridge. 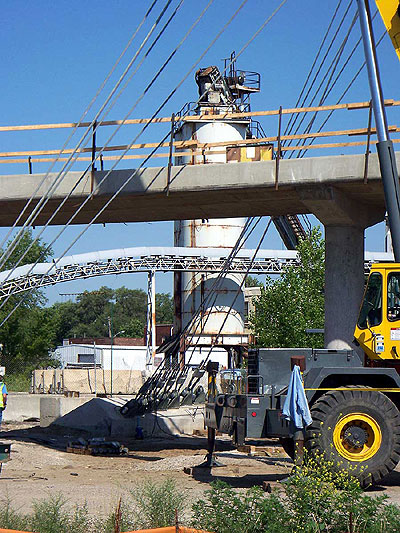 The cable anchors on the west side.

The grading is looking done on the east side. It looks like this bridge might be open this fall.

I rode on. Is there anything more luxurious than a beautiful day, a lovely bicycle, and absolutely no agenda whatsoever? I rode to the end, then backtracked to the Cars'R'Coffins where I settled in to read a 'zine, drink a latte and consume a delicious ginger and currant scone. 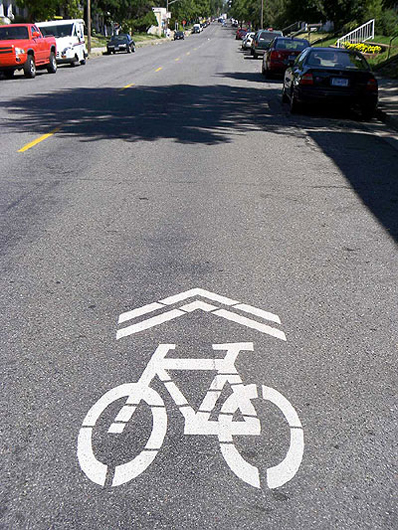 Riding up Bryant Avenue there were new markings on the street. There's not room for bike lanes, but these get put down. I guess they've been trying them in some cities and they serve as useful reminders for motorists that bicycles are there and to cyclists which direction to ride (just tonight, coming home, I had to make room in my lane for a wrong-way cyclist). Plus they're cheap. It's the first time I've seen them in person.

I rode on, back to the Greenway, out to the end of the path, then back up the Kenilworth Trail. It leads to the Cedar Lake Bike Path and I've never ridden on this. I got on it and rode into Minneapolis.

I have to say, it's a pretty greasy way to enter Minneapolis. It goes by highways, past the impound lot, past vast dunes of sand the city keeps to scatter about in winter, growing a crown of weeds now, by piles of smashed concrete. Minneapolis is a lovely city in many parts, but the Cedar Lake Trail is not the way I'd bring in a first-time visitor!

Ominous signs loomed up. TRAIL CLOSED AHEAD. I idled up to the sign and peered on down around the bend. A young couple pulled up. Do you guys know if this goes through? I asked. One of our friends says it's ok said the young lady. I have no schedule, what can happen?, I ride a mile and have to turn back? I head on past the sign and the young couple follows.

The trail carries on for a mile or two, the scenery not improving, and finally does come up to a read end, another sign, but backed up by a fence next to a steep dirt hill leading to a parking lot behind a warehouse. The young lady, the couple having caught up, muscles her bicycle up the path. The young man gets a phone call and takes it and I head up the hill too, having noticed a grisly-looking homeless person watching us with interest. I hung around in the parking lot with the young lady and the homeless guy who kind of grunted at us and sidled off, until the young man showed up, then I clipped in and headed around the corner.

The fencing that ends the trail is blocking off the site of the Minnesota Twin's new ballpark. There is some pissing contest going on about the price of this unpromising-looking bit of real estate, the price having gone up once the Twins got interested, but despite the lack of resolution on price, work has started.

Your Tax Dollars at Work II

A panorama of the ballpark site. 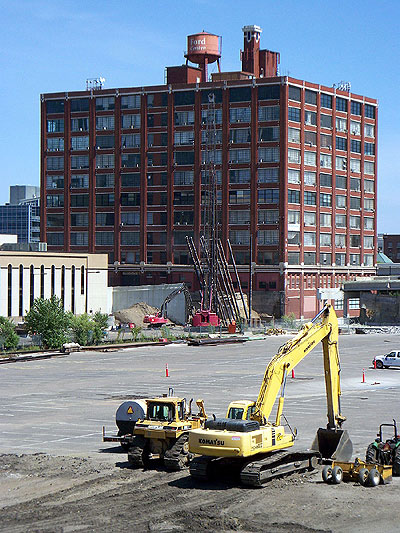 It would be aggravating to work in the building in the background since there was a continuous headache-inducing pounding going on on the pilings in the foreground. Sure are a lot of construction guys working this lovely Saturday!

I was getting kind of hot so rode over to One on One Bicycle Studio, locked up, and got a cold drink and sat reading a book for a few minutes. I took my leave and rode home, stopping for a photo or two, idling along, up the Hendon hill off Como Avenue, cutting through the U of M Saint Paul campus only to find that I was locked out of the State Fairgrounds due to some event, backtracked, took Como Avenue home and arrived back before teatime. I popped my head into Geneva's room and she was crying into the book; the house orca had just died or something. Bummer. I couldn't think of anything appropriately soothing to say so just went back downstairs and put the water on.

It wasn't a fast ride, it wasn't a long distance (about 38 miles in the end and some pathetic average speed, par for the course when I'm exploring, lost or taking photos), there was absolutely no purpose to it at all, but it sure was delightful to just wander along without an agenda and follow my nose. For all their utility as transportation, bicycles are just plain fun as well. I hope I have more days like these, and I hope you do too.
Posted by Matt at 7/24/2007 09:34:00 PM 2 comments:

While I have been preoccupied the past month with various duties, visitors and trips, I have begun reading a couple of fun blogs pretty regularly. I really like the locally-done Pinch Flat News, which comments on bike industry trends and seems unduly hostile to folding bikes (I don't have one, but like the idea).

Separately, the New York-based Bike Snob NYC has a hilarious take on bicycle fashions, especially the Fixie Phenomenon. I can laugh at this with a clear conscience, never having had a fixie and having dispensed with singlespeed bicycles when I got my Columbia Tourist 3-speed for my tenth birthday. However, I can also recognize the passing fads of cycling when I see them and know that I haven't always been immune. When I was that age, it was lugged steel ten-speeds with too-high gearing and sew-ups. It's funny, and a bit rueful now, to look back and think that I couldn't possibly live without the superior handling of the silk tubulars whilst riding my bike to work at Sears.

1977:
Rational Observer: "But your tires are skinny, hard, fragile and expensive."
Earnest Enthusiast: "Yeah man but when you have exquisite cycling sensitivities such as myself you demand only the finest-handling gear to ride to work."

A rational look would have had me riding to work on a three-speed, probably, with the gear ratios knocked down a bit, but the early 20s are not a rational age and are informed by fashion, style and a painful earnestness. The crowning mercy for those of my vintage (nearing 50) is that we pretty much embarrassed ourselves among a limited circle of friends whereas now any clownish hipster can proclaim their painful earnestness and infatuated enthusiasms to The World on the web. This scrap of self-knowledge doesn't keep me from enjoying Bike Snob; take a look, you might like it too.
Posted by Matt at 7/18/2007 12:04:00 AM 2 comments: