I went off to see BikeSnobNYC at the Coffman Memorial Union at the University of Minnesota. I don't ride over to Minneapolis as much as I used to. It wasn't the ideal day to ride:

...Wind Advisory Remains In Effect Until 7PM CDT This Evening...
*Winds...Sustained Winds Increasing To 25 To 35 Mph This Afternoon...Gusting To 45Mph.

*Impacts...Hazardous Driving Conditions...Especially For This In High Profile Vehicles. Unsecured Lightweight Objects...Such As Trash Cans And Lawn Furniture...May Be Blown Around.

And so on.  Long experience cycling in the Midwest teaches you to do your rides outbound into the wind and homebound with a tailwind. It's a painful lesson the first time you think you've got new strength and vigor and head 30 miles out in the country going, Man, I'm like freakin' Eddie Merckx (it's been a while since I've done this), look at me, then you turn around and struggle back into the teeth of your former tailwind as it drains all hope and spirit from your sorry corpse. Anyway, as it happened, I set off into the teeth of 25 to 35mph sustained winds.

I went down Hoyt and my usual crossing of Snelling into the open gate of the State Fairgrounds after a long delay from a slow light. 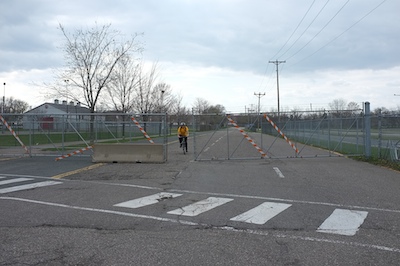 That gate is left open most of the time, except most of August as the Fair sets up. Waiting to cross Snelling I could appreciate the bucolic aromas blowing my way from the University of Minnesota's livestock barns. They would only get more intense until I passed by.

Once at the University's Minneapolis campus, I found Washington Avenue all torn up as they add in Light Rail. I guess I shouldn't have been surprised, but it caught me off guard. I rode to Coffman Memorial Union and locked up the bike in the crowded racks out front, then went down to the bookstore.

The BikeSnobNYC had met some cyclists at the Freewheel Midtown Greenway store and ridden to Coffman Union with them.  I thought about it, but didn't leave work early enough to labor another 7 or 8 miles into the wind.  Thus, I missed out on bonus Snob time but did get a seat at the presentation. 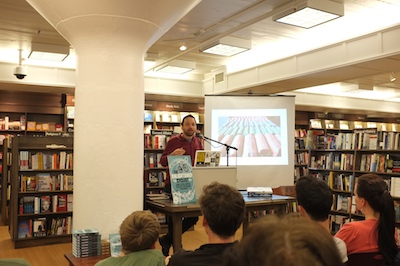 We were kind of wedged in there, and those who had ridden had to stand for the presentation or sit on the floor.  I think it was more people than they had expected.  Snob followed along with the theme of his book, pointing out that we were relatively powerless in economic terms, the $6 billion spent in the bicycle industry being dwarfed by auto companies, pharmaceutical companies and oil companies, but we could become a religion.  He promoted his Lobster God, pointed out how religions are an excuse for all kinds of odd behaviours and funny clothes (he didn't mention the Mormons' special underwear, perhaps a corollary of cyclists' shorts) and then cyclist abuse could become a hate crime.  Some of the time he talked about being a good cycling citizen, which forms a large theme in his latest book, The Enlightened Cyclist: Commuter Angst, Dangerous Drivers, and Other Obstacles on the Path to Two-Wheeled Trancendence.  One of the great things about Snob is that he is cynical and funny as hell in the blog yet there is an underlying good nature.  It comes out in the books (his first book was Bike Snob: Systematically & Mercilessly Realigning the World of Cycling).  I'd recommend reading these books.

There were questions afterwards, including a couple of mine, particularly wondering if Snob was working full time when he started the blog.  When I first started reading him he was only a couple of weeks in and I was pretty amazed at the volume and quality of the writing (the photography traditionally blows).  Could this guy be working full time?  Yes, at least to start with.  He quit about the time his first book came out.

People lined up to get books signed (defaced, as he calls it).  He signed mine.  Then I wandered on out in search of Objective 2 of the evening: trying a Chick-fil-A.  I went upstairs and asked where it was.  Back downstairs, but closed.  It's only open 10:30 to 2:00 on weekdays, not on Saturdays or Sundays at all.  What?  I went back down and found the place. 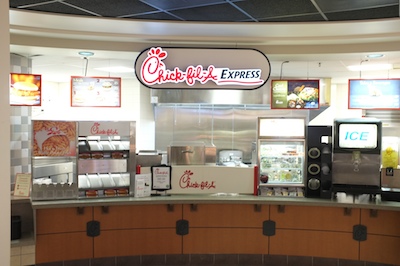 Yep, closed.  Those are some stringent hours.  So, if I want to try a Chick-fil-A, I've either got to get myself to the Union on a weekday at lunchtime or, alternatively, fly somewhere, get fondled by the TSA, and try the one at the airport.  Fil-A & a Fondle.  Sounds like a decent night out.

Well, time to head on home.  Now comes the reward for the slog over to the Union into the teeth of the gale: the return trip.  The wind was still pretty snappy: 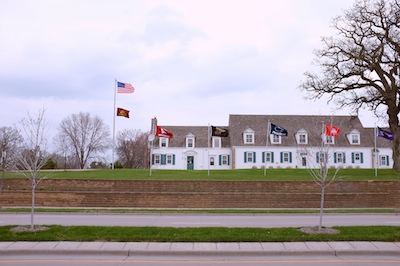 Those flags are at the University of Minnesota golf course.  As bad as it is being tall on a large bike frame going into the wind, it is superb with a ferocious tailwind. I got into my highest gear (a relatively modest 91 inches, something I rarely use) and spun along Larpenteur towards home. It sure is fun to clip along at 22 mph without even trying very hard! I've heard of people doing Tailwind Centuries where, on days like this, they are taken 100 miles out into the wind by motor vehicle, then ride back for an easy 100 miles. It hardly seems fair, but I can see the allure.

Having failed to get Chick-fil-A, I stopped at Stout's, a relatively new place plagued with utterly inadequate bike parking. They have some outdoor seating with a cage around it, so I locked up to that while I ate. 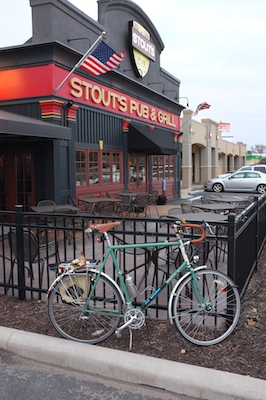 Maybe restaurants don't want cyclists, maybe they just don't think about us, at least they're better than Caribou Coffee who have almost universally absent bike parking yet often have banners of cyclists hanging inside.  I'm going to have to write page on retail establishments and bike parking. Plenty of places that you think would welcome cyclists (including, for instance, most bike shops) have nowhere to lock up despite acres of parking for motor vehicles.

Sated, I cruised on home with the tailwind. I liked actually meeting BikeSnob, it was fun to hear him give a talk, good to put a face with the online persona so many of us know. I think his presentation needs a bit of work yet, but he's off to a good start and is anyway preaching to the converted. And, for all the joking about religion and barking at poor cyclist behaviour, the message is pretty classic; be nice to others, treat them as you would be treated, and try and love your fellow man despite his foibles.
Posted by Matt at 3/28/2012 01:05:00 PM 1 comment:

I've Been Working on the Railroad

We've been uncommonly warm here the last few days, after an unusually warm and snowless winter. One of the big markers of springtime in Minnesota is "ice-out", when the ice on the frozen lakes melts out and the lake returns to open water. On March 15, Como Lake was on the verge. 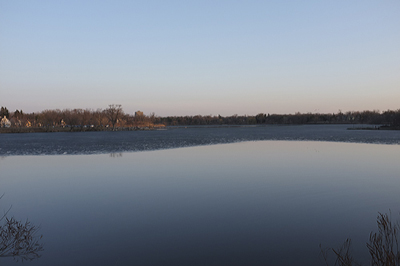 The ice has gone black and there's some open water at this end of the lake. The next day it would be in the upper 70s and the ice would go out of Como. I don't pretend to know what average is, but I expect it is 2 or 3 weeks later. Heck, the last date for getting fish houses off the lakes was February 29, just two weeks ago.

Ice out has nothing to do with cycling, of course, other than the warm and lovely weather has got lots of people out riding. I was among them, riding down to see how this season's construction on the Central Corridor Light Rail was going to affect my usual southbound routes.

Chatsworth crosses University and makes a dandy north/south route if you don't mind one informal railroad crossing. Once the light rail is in, this will be a signalled crossing. Going north from here you run into the informal railway crossing issue, then into navigational confusion around Como Lake. Southbound, Chatsworth goes all the way to St. Clair, then, with a one-block detour, down the hill to Jefferson and West 7th.

One irony of the light rail is that the Twin Cities used to have a wonderful streetcar system. Many of these streets are excellent cycling streets nowadays since they are pretty wide. University Avenue had streetcars (one of the reasons it is so wide and has always been a useful if not scenic cycling route, something that is likely to change if Saint Paul Public Works has their way) and so as they tore up the street they unearthed the old streetcar tracks. At one point, they are said to have tested the tracks to see if they were usable. Had they gone with a more modest streetcar installation (like Toronto has always had, or Portland has installed), one can't help but wonder it they wouldn't have worked, but instead it's going to be a much heavier "light rail" train and have a major railbed. 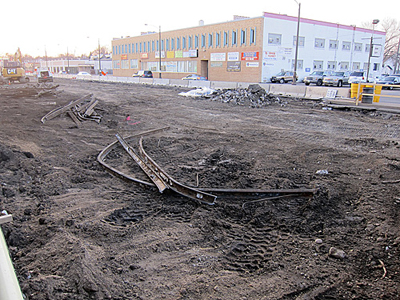 If you're driving, you can't cross University at Chatsworth, but there is still a pedestrian crossing. They'll work the south side of the street first, with all traffic funnelled along the north two lanes, then switch and do the reverse. I think pedestrian access will be maintained all along, and happily, it's good enough for cyclists. 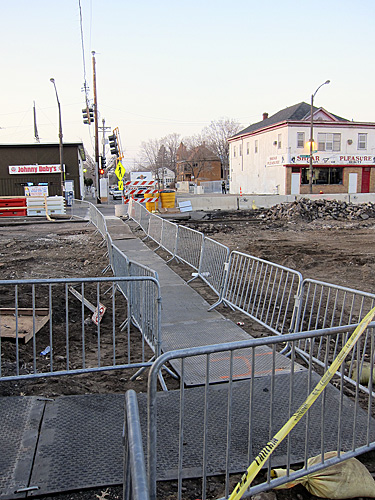 Hamline is the same sort of arrangement; no traffic access across University, but a pedestrian accomodation big enough for bicycles. 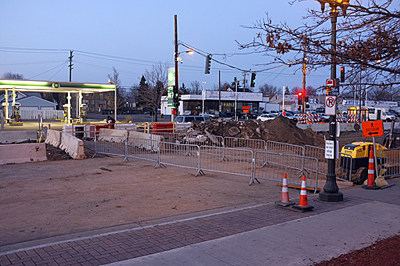 How this all ends up laid out when done is still open for discussion. The plan is to do four traffic lanes with no on-street parking. This is going to suck in many different ways, mostly because it will put high-speed traffic (yeah, yeah, 35mph limit, but these will be 12 foot lanes, the same width as Interstate Highway lanes) right next to the sidewalk, not pleasant for pedestrians and offputting for, say, sidewalk cafes. I'd like to see one through lane and one parking lane with a bicycle lane between them. It's not perfect; it's a bike lane running right in the door zone, but it allows on-street parking for the small businesses which populate University, those which survive construction anyway.

In the meantime, we can still get across University by bicycle and keep an eye on how construction progresses. They've sure got an early start on it with this weather.
Posted by Matt at 3/16/2012 11:37:00 PM No comments:

I've followed BikeSnobNYC since he started his blog and have had a link to it in the sidebar pretty much since the beginning. Snobby wrote a book Bike Snob: Systematically & Mercilessly Realigning the World of Cycling which, for all the snark and hilarity in the daily blog, was a thoughtful and even earnest book (though still with plenty of snark!). Well, Snob's written another book, The Enlightened Cyclist: Commuter Angst, Dangerous Drivers, and Other Obstacles on the Path to Two-Wheeled Trancendence, and he's off on a BRA (Book Related Adventure) including a stop here in the Great Balmy North. I haven't read this book yet but it promises to be good.

Here are the details:

apparently heading to the 4:30 booksigning at the U. I guess we're going to show off our defective infrastructure as Snob'll be able to admire the underside of our out-of-service Sabo Bike Bridge over Highway 55. Snapped cables, you know.

Once the adulation of Snob is over and he's defaced our books, the next big feature of the evening can be a visit to the Coffman Union's Chick-fil-A restaurant, the only one in the Twin Cities not protected by the TSA! They sponsor one of the crappy college football bowls, now I can find out what all the fuss is about. It promises to be a great Tuesday.
Posted by Matt at 3/16/2012 03:56:00 PM 3 comments: