Riding to the Farmers Market

It was darn hot this past weekend, Sunday was the 9th day in a row in the 90s, the longest streak since 1988 which is long before we moved here. Saturday I decided to ride down to the Saint Paul Farmers Market to see what looked good. I took the Atlantis.

One of the common problems with Farmers Marketing is buying too much and ending up with locally-grown organic healthy produce rotting away in the veggie bin in the refrigerator. On a bike, this is much less a problem.

The Saint Paul Farmers Market is downtown on Saturday mornings. 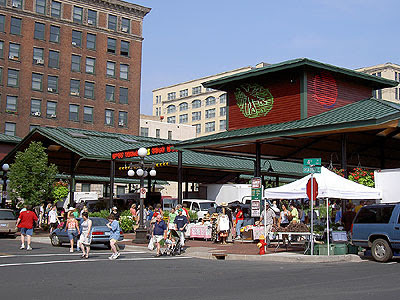 Parking's no problem on a bike! While the cars queued up and lumbered around the block looking for somewhere to nest, I rode up to a handy parking meter and locked up the bike. 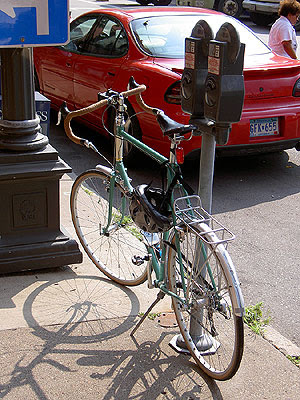 There's lots of Hmong vendors here. These folks are from the mountains of Laos and made the mistake of supporting the United States during the Vietnam War. Something like 10% of them were killed as a result and many thousands endured time in resettlement camps before getting moved to this country. For some reason, Saint Paul has become a big Hmong center. Our winters must be vastly different than those in the Laotian highlands, and I wouldn't say everybody's assimilated yet, but plenty of Hmong now own produce farms and sell at the local markets. 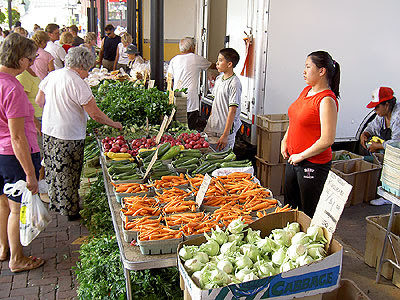 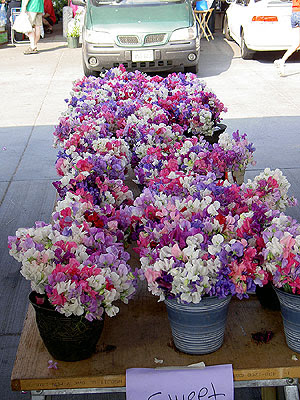 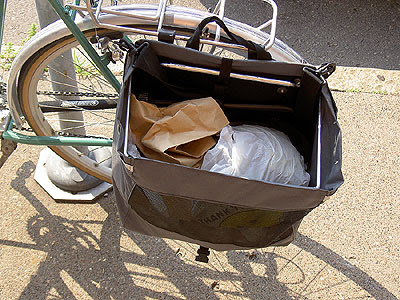 There, not too full! This are two little cartons of tomatoes, some jerky from the Jerky Lady, a pint of raspberries, a big thing of varied lettuce and some potatoes. I wanted some of the excellent Costa's Hot Picante Sauce but didn't see them there this morning. Having the one grocery pannier, which I uncharacteristically carried with me using the shoulder strap, kept me from getting too ambitious in my purchases. I saddled up and rode home.

I've just started riding my first SPD pedals. These have taken almost no getting used to. The main impediment was finding shoes big enough. I finally got a pair of Adidas El Moro IIIs in American size 14/European 49 1/3. I hadn't realized going in just how scarce these would be and went to store after store for a couple weeks seeking them out, finally getting them last week at The Bicycle Chain just around the corner from us. During my quest I met Jim of Oil is For Sissies over at Freewheel. They had previously had some Shimano shoe in stock in sizes 49 and 50(!) but they were gone the day I stopped in. Jim said some Sasquatch must have stopped in and bought them. Hey! These Adidas aren't necessarily the color I'd have gotten, but they do fit nicely and are decent to walk around in. Here they are in action: 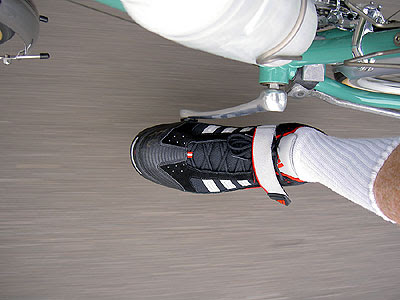 I was surprised how sensitive my knees are to tiny changes in the cleat angle. I rode the Marin to work last Friday with these shoes and my knees were bothered, so have been riding around with an allen wrench handy so I can adjust them. The Ritchey SPD-compatible pedals on the Atlantis have proved very simple to use and I have found myself clipping into the right pedal once I've got going with little problem. I rode my Marin, on which I have a pair of Nashbar dual-sided pedals, one side SPD, one side platform, to the grocery store Sunday evening and nearly fell over at the top of the driveway. The release tension is a lot higher on those than on the Atlantis's Ritcheys and I almost didn't get my foot out! That would have been embarassing! I noticed it again riding home from work yesterday; I'm going to have to loosen the tension on this a bit.

I'm ready to declare the Atlantis fully operational. I'm sure the world receives this news with joy and relief. I've changed stems, wrapped the bars, got the SPD pedals on and shoes bought, got a front bag arranged and ridden about 250 miles on it. I still have plans to do a different front wheel for it using my circa-1977 Phil Wood front hub, but that won't substantively change the bike, it'll just be good karma. I am delighted to say that I really like this bike a lot. There's always the nagging fear that you're going to drop a bunch of money on a bike you've been dazzled with and then you're going to discover it's nothing special or that you actively dislike it. That has not been the case. It feels great for size, really the first bike I've ever owned that's big enough for me, and lively in response. The Marin feels pretty tugboat-like all of a sudden, some combination of beefy frame, less optimal riding position and big tires, perhaps. A lot of Atlantis frames seem to get built out with big tires on them and the option to do that is one of the attractive things about so adaptable a bike, but I have on the Rivendell Rolly-Poly 700C X 28s so they look like comparatively fast road wheels compared to the 700 X 37s so many people put on.
Posted by Matt at 7/20/2005 09:15:00 PM