I rode to choir rehearsal last night, rather than taking the bus as has been my habit since our Wednesday night rehearsals began. We have bought a Yakima Super Joe 3 bike rack for the Avalon so I had the nice backup assurance that I could slap the bike rack on the car and carry the bike home if needed, or I could ride back if I felt like it. This works out nicely on Sunday mornings; we have our Traditional Service at 9:00 and then a Contemporary Service at 11:00 (I like to think of them as the Stodgy and Lame services). I sing in the 9:00 choir and about the last thing I want to do is hang around until 12:30 when Karla is finally free of the late service obligations before going home. I can toss the bike on the car, haul it to church (we get there by about 8:20) then ride home after the 9:00 service is done and I've had a cup of coffee and some baked goods at the Coffee Hour. Thusfar, I haven't ridden on Wednesday nights, though, so this was a new one for me.

I haven't ridden much in Minneapolis on weekdays. My commute runs north into Arden Hills where I see a smattering of other cyclists. I was surprised to see how many cyclists were out and about as I rode to church. I left about 6:00 and headed down Hoyt and Raymond and Pelham in the fading light. Not for me the dark anonymity of the deepening dusk, I have two LED taillights on my bike and one on my helmet plus two headlights.

At the Lake/Marshall Bridge a peace march was going on, a vigil noting the death of the 2,000th U.S. soldier in the Iraqi war. I stopped to take a photo or two but they kind of bagged, the light was so dim. I need to carry a small tripod with me for these dusky shots, plus the digital isn't as good at long exposures as my film cameras. I did take this photo of a tow moving upriver towards downtown Minneapolis. I rarely see tows on this stretch of the river, not that I'm by here much on weekdays. 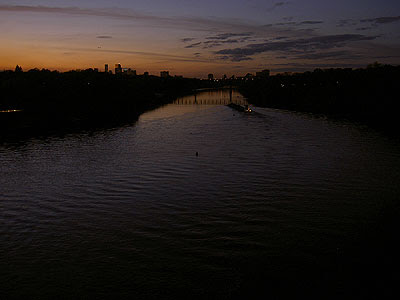 I rode on. I'm still casting about for a good commuting headlight solution. I ran two headlights tonight, one a Blackburn Quadrant four-LED light that I'd like a lot better if it wouldn't shake out of its handlebar mount, and the other a 1-watt 3-AAA LED flashlight from Target that I rubber-banded to the flat drops of my handlebars. Together these provided decent coverage even in the darker bits of the bike trails down the Mississippi. The main trouble with the LED lights is that they get part of their remarkable brightness from being very focused, so the tight beam doesn't illuminate much other than what's straight ahead and isn't helpful when coming to turns in the dark.

There are a couple of other lights which look interesting if I were infinitely rich, which I'm not. The Light and Motion Vega is a 3-watt LED light that's completely self-contained with its NiMH batteries. I have been pretty impressed with my little 1-watt Target light and am intrigued with how bright the 3-watt L&M Vega would be but it's $159 at Calhoun Cycles and that's quite a lot of money. While reading up on the Vega I also came across the DiNotte Ultralight 5-watt LED light. It also sounds intriguing, but it's over $200 from Nashbar and takes a separate battery pack. Of course, if I was infinitely wealthy I'd just get one of the HID lights (or two!) and scorch my way home through the night.

I rode on down the west river pathway and then out the Minnehaha trail to choir rehearsal. I was coming out of the coffee shop near church when the bus came by, the one I would have taken had I taken the bus. Cycling's a bit faster if you don't stop to take pictures and buy coffee, but would be a bit slower if I make the instantaneous connection between my buses downtown.

I have to say I was surprised by how many cyclists ride without any lights at all. I met several along the trails who were almost invisible in the dark. I would prefer to be seen whether on the street or on the trail. Even on a trail, a head-on crash would be pretty unpleasant. On the other hand, it was good to see a number of commuters, with fenders, lights, a pannier and often a yellow or orange vest. It is the nature of cycling that you meet these people coming the other way rather than overtake them, so there isn't time to see what people are doing equipment-wise, but there were more out and about in the 6-7PM time frame than I would have thought.

After choir, about 9:10, I thought, what the heck, I'll ride home too. I headed out. Trail traffic was much lighter this time. The Blackburn light, which I like up to a point, fell off twice, both on the bumps of parking lot entrances along the West River Road bike path. I'd bang up and down the thresholds, standing slightly in the pedals to let the Atlantis pivot beneath me, and suddenly the light comes out and goes skidding down the pathway. Being LEDs, they don't go out when this happens, but it's still pretty annoying. A decent handlebar mount shouldn't be that hard to make.

I rolled in about 10:30 and put everything away. I haven't traditionally ridden much in the colder months and it's interesting to ride as the weather gets cooler. I wore a wool tshirt, a wool long-sleeved shirt and my DayGlo yellow cycling jacket and some thin full-fingered gloves and was plenty warm as the temperature went into the upper 30s. I do find that my eyes water a lot in cooler weather. I wonder what people do in the really cold weather. Ski goggles?

I heard on the radio that Paul McCartney, who sang last night here in the Cities, was seen riding a bicycle around Lake of the Isles. I bet he could affort an HID headlight!
Posted by Matt at 10/27/2005 09:58:00 PM

My eyes have been watering in the cold as well and I'm thinking I'll go to ski googles as the whether gets colder. I hope to keep going well into winter, if not all the way through. Might be too much, but we'll give it a try.

Right now I am running a Serfas 5LED light up front, a clipped blinky on the back of my helmet and a 10 LED light on the back of my bike. I'm hoping that any tax return I get for this year might finance a shimano generator hub - if I had my way.

I have been using the Nashbar NoFrame Sunglass Item No. » NA-NOF for the past few years. I got a pair of the clear ones and they cost $6.95 -- there is no frame so peripheral vision is great and they are durable. I use them on the ride in the morning and they do a good job of keeping the wind out of my eyes.

As for lights, I sprung for the Schmidt hub from Peter White two years ago and while expensive initially, they are fabulous lights. I went thru the normal battery lights over the years and the batteries do not last in the cold. I never worry about lights failing and have not even had to replace a bulb yet.

If you want to see what they are like, let me know and I am sure we can get together at some point.