Some various notes from the last few days.

I rode to church again. It was our priest's last Sunday, so for the third week in a row we did an 11:00 Festival service rather than the usual 9:00 Stodgy/11:00 Lame service schedule. Since the choir sings the Stodgy service (which is becoming somewhat less stodgy as time goes on) and has to warm up, we need to be there before 8:30 most Sundays, and at up to an hour and a half to ride in requiring a 7AM departure, it's unlikely I'll be riding in on Sunday mornings for a while. It was another cold morning, 16F when I left, but clear and dry and a routine ride. After church, I partook of my new favorited Sunday afternoon riding tradition, not finding a bike store whose location I more or less know. Last Sunday I rode obliviously by the new Hiawatha Cyclery; this Sunday it was the turn of Sunrise Cyclery. I remembered this as being at 31st and 3rd Avenue, rode there, and trolled up and down a couple of blocks without success. Turns out that it's at 31st and 2nd Avenue, I was a block away, but by then I'd given up, got on the Midtown Greenway and ridden home. I was going to look to see what Sunrise had in the way of used 3-speeds; I bought a 1967 Sturmey-Archer AW 3-speed hub from the Sibley Bike Depot on Saturday (another ride, but this time I at least knew where Sibley was!) to build a wheel, but a friend of mine is looking for a 3-speed for the Lake Pepin Three Speed Tour in May. Oh well, I'll have to try Sunrise some other time.

Speaking of English 3-speeds, there was an article in the New York Times last week about how accurately Woody Allen's new movie Match Point portrays London's geography. This is the photograph from the article:

I like how the main prop in the photo is a bicycle, what looks to be an English 3-speed. I hope it's locked, because from what I can tell, bicycle theft is a big problem in the UK, especially in London. One wonders what the prop would be in New York. A hot dog stand? A yellow cab? Cops beating some Critical Mass riders?

Speaking of English bikes, I rode a week ago Sunday to a friend's house in Bloomington to watch the Super Bowl. I parked my bike in their garage, and then, when leaving, saw what looked like an English 3-speed in the garage. The wife in this couple is from Northern Ireland, so I inquired at choir practice on Wednesday. Turns out this is a Cyclemaster, a 25.7cc two-stroke gasoline powered bike her father, a priest, bought in 1950 and used for several years to make the rounds in his parish before he could afford a car. The bike cost 25 pounds, the Cyclemaster accessory was 25 pounds more, at a time when he made 400 pounds a year. They've kept it all these years and now the husband has got it running again. 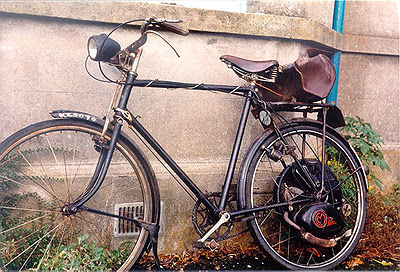 This is a photograph of the Cyclemaster in 1963, still in Ireland. This couple has a scan of the owners manual and I slapped it together in a PDF file and have posted it to the web. Once the weather warms up, we're going to get this thing out and play with it and take some photos. It looks like good fun. It would be fun, and truly British, to take on the Lake Pepin Three Speed Tour but that might be unsporting.

More English cycling news. The Tour de France is starting in Britain in 2007, the Prologue in London and the first stage from London to Canterbury:

Well, my family's English, I have a heap o' cousins over there, so I looked up a couple of addresses in the Yahoo! UK Maps and compared them with the roads in my Ordnance Survey Motoring Atlas of Great Britain. It looks like one cousin lives about 1.5 miles off the route early in the stage when the race goes from London towards Greenwich and another lives one mile off the route as it passes through the Kent town of Tonbridge. Sadly, none of my cousins had the foresight to move to Canterbury. Although I doubt that I will do anything about it, it is tempting to imagine hiring a motorcycle (from Scootabout in London, where a friend and I rented Honda 500s for a couple of happy weeks in 1985), catching the race going by in London, then zooming off to Tonbridge to see it pass there as well. Well, we've got more than a year to consider it.

These cousins are the children of my Uncle John, who died in December. As related in an earlier entry, I was unable to attend the funeral. However, we were sent a copy of the Reflections on Uncle John's life. From a cycling point of view, these bits are interesting:

"As a teenager he was a keen cyclist, making expeditions alone equipped with a small tent or sometimes accompanies by his friend Trotter Trout....He still cycled and traveled during the vacations and in 1939 whilst his family were camping in Folkstone he and a friend were on bikes well in to France. Heading east near Reims they encountered refugees fleeing in the opposite direction and decided the wisest course was to turn around and pedal hard for the Channel ports...[he was] commissioned into the 109th Field Artillery of the Royal Artillery and spent time training at various locations including Northumberland and Cumbria. He rode a large motorcycle for a short time until he hit a milk van head on but was saved by flying over the roof and landing on the road, only cutting his leg with a small scar that he would show us when we were small."

I stayed home Monday, wife's on jury duty, daugher's sick, and left only to pick up my truck. It was making some hideous noises from the back. It's a 1996 Ford Ranger, made right here in Saint Paul, a little less than 67,000 miles on it, and it needs a differential rebuild. What do you do? I OK'd it, and it was $1,700. Funny how you just swallow and pay up to fix a motor vehicle, even a cheapish one that is running into problems way too early, when spending that kind of money on a bike is something I agonized over for years. And I like bikes. I rode my bike up to the dealership to pick up the truck, then tossed the Marin in the back and drove home. On the way up, when cars passed by, the dust they kicked up tasted salty. We're in for a cold week these next few days, but it won't be long and winter will be over.
Posted by Matt at 2/14/2006 07:55:00 PM

I wonder how those rod brakes work on those steel rims on a wet day with that gas motor pushing everything along.

The PDF link (http://twocitiestwowheels.blogspot.com/Cyclemaster) 404s on me - I gotta see it, man!

That "cops beating CM riders" thing 'bout had me burst out laughing. I mean, it's something I take very seriously, but it was so out-of-the-blue!

So true about fixing cars. What are you going to do? You could look at it as a blessing, as a reminder of what's so messed up with how we get around. You could, at least... ;)

My car is paid off and I like not having car payments. (Not enough to be car-free like the Oil Is For Sissies folks...not possible here in Appalachia...the buffalo are too aggressive.)

I'd rather pay repair bills occasionally than car payments on a depreciating asset monthly. New cars are wealthkillers.

Using a roofrack constantly 8 months per year, occasionally fumbling my boat and the oarlock adding a new deep scratch to the paint, driving 30k miles a year because of the refereeing travels, well, I can't justify a new car. I'm looking for something with a long flat low roofline next time. It's hard to find station wagons, perhaps a Subaru wagon. Then I can put my sculls and rowing machine inside the car. Nice.