Sunday I tried something different, taking the bike to church on the car and then leaving after the early service. This worked out very nicely, with me changing into warm clothing and heading out. I overdressed; it had been 16 out when we'd left for church and I dressed for it, but in the interim it had warmed up, so that when I got home by 2:30 it was 34 outside. I eventually stopped and took off my sweater and admired the view. 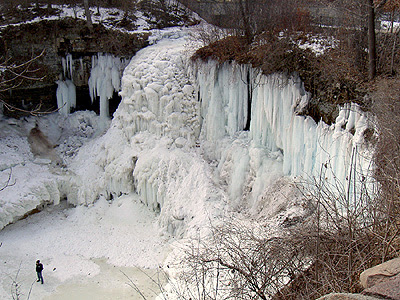 The Minnehaha Falls, shortly before the Minnehaha Creek enters the Mississippi in Minneapolis, are an attractive feature nicely set in a lovely park. I hadn't been by this winter, having taken more direct routes home, but I was trying something different this time. The ice of the falls looked very dramatic, and there were some visitors down on the frozen creek surface taking photos. You can see one of the guys in the photo, giving you a sense of the scale.

Having removed my commando sweater, I rode on, crossing the river on the Ford Street bridge. The Mississippi is largely open; one week it looked well-frozen over, the next it was clear. I think the ice must float off downstream. Within a month the river will be open for navigation again, but for the moment there are still areas with lots of ice. 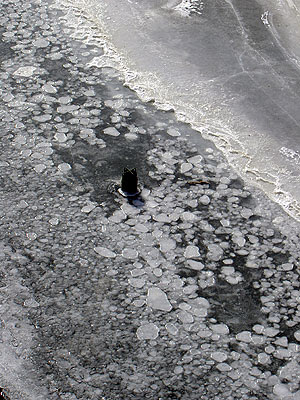 Here you can see a navigation buoy in the ice on the river just above Lock and Dam Number 1. 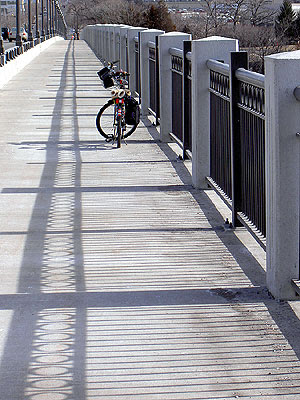 Here's the Marin parked on the Bridge. There's nothing remarkable here, I just liked the pattern of the shadows.

I rode on across and worked my way up to Raymond Street. There was a Swap Meet going on but, in my typical fashion, I had only a vague idea of where it was. I got on Raymond and rode by a parking lot full of cars with bike racks. Aha! This must be it! I parked the bike, paid my five bucks, and went in.

Almost immediately I ran into Jim and Kevin from Hiawatha Cyclery who recognized me from a couple of brief encounters last summer. I admired their stuff, took one of the excellent Atlantis brochures, and took a look at a 68cm Eisentraut frame Kevin had bought. A friend of mine in Saint Louis rides an Eisentraut he got in about 1978 I think.

The meet was probably great for the total equipment freaks. Here's what I wrote a friend of mine:

There was a Mavic crankset which looked very sleek but where the large chainring was a part of the crank forging, so it could never be changed. This seems an odd design decision although on the other hand I hardly ever ride the big chainrings and have never ever worn one out. There was a Bridgestone XO-1 there, not a pretty bike, but I thought maybe they should have a kneeling cushion and some prayer candles and incense in front of it so we could all worship ("Our Grant, who art in Walnut Creek, Moustache be thy bars"). The Hiawatha Cycle guys were there and had a really nice Atlantis brochure, one of which I took. It's so nice I want to buy another one! There was a photo on back of the 47cm (I think, the smallest one anyway) and the 68cm frames side by side, aligned at the bottom bracket. They had a normal-sized built-out Atlantis there (and a Ramboooeelay) and the measured the downtube diameter which was 1.25". I used a tape on mine, not calipers, too lazy to go inside, but am pretty sure it is 1.625". Jim (Oil is for Sissies, one of the Hiawatha guys) said they thought about carrying Pashleys but figured it might be too expensive and take a lot of explanation to sell them. He thought they'd be $1,300 but this seems high to me, they go for 460 pounds in the UK, maybe $825, and I figured it would run a couple of hundred to ship here, but maybe you'd get VAT back, so just assumed a Roadster Sovereign would cost me $1,000 delivered, maybe a bit more if I bought a spare tube and tire or two. There were a bunch of bikes and components that I'm pretty sure are extremely lustworthy to small subsets of the cycling community but of which I know nothing. There was a framebuilder (Chris Kvale, who is well thought of) selling framebuildng jigs. He has a little store I ride past on the way to/from church on my normal route and is closing the store; maybe he's stopping making frames too. And there were many way cool people, old Steel Framers like ourselves (not cool), tattooed singlespeeders, in-the-know racers, etc. Also some cute babes. I impressed this lot by, as I left, riding off the curb and having my pannier fall off.

I didn't buy anything. I did get something off eBay in the mail today, a 46-tooth Biopace chainring I want to try on my Schwinn World Sport with a Nexus 8-speed hub. I'm gathering the parts to do this, the Biopace is just the next item. It is kind of hilarious, it looks like a manufacturing mistake or maybe the detritus of some hideous accident.

I did ride home and my pannier fell off twice more. This is truly annoying. It is a pretty nice pannier, a very useful model no longer made, but it has the traditional U hooks (think an upside-down U) and an elastic bit that hooks on the rack bottoms. When you go fast, or over curbs in front of cute 21-year-olds, it bounces off. It ought not to be that hard to make hooks that lock on the rack, that hang on no matter what, and I may try and chase down an Ortlieb or Carradice set of clamps and graft onto this pannier to stop this.

Riding home was pretty fast. I thought maybe this was the awesome power of my magnificent legs but eventually noticed that the flags were snapping pretty well and I had a good tailwind. Still, it felt nice.

In other news, further details have come out about President George Bush's bicycle crash last summer at the G8 summit in Scotland. Apparently he came riding quickly by a group of policemen and tried to wave as he rode by and crashed, sliding for 5 metres and hitting a policeman hard enough that he was off work for 14 weeks. You can read about it in the New Zealand Herald. Sadly, the remarkably restrained Al Jazeera article seems to have gone. Oh well. As you may recall, the seriousness of this accident was minimized at the time. President Bush is going to end up clumsier than President Ford; he chokes into unconsciousness on a pretzel, falls off a Segway, crashs his bike in Texas and again in Scotland. With his lawyer-shootin' Vice President, it's like Laurel and Hardy leading us.

The San Francisco Chronicle has a report about actual charges being filed against a bus driver who attempted (er, allegedly attempted) to run a cyclist off the road, then ran over his $5,000 bicycle. The charges are for assault with a deadly weapon, vandalism and reckless driving. Man, wouldn't it be gratifying it that happened a little more often!

Speaking of bikes'n'crime, the Washington Post is reporting that a punk bank sticker on a bike cause a big bomb scare in Ohio:

ATHENS, Ohio -- A sticker on a bicycle that said "this bike is a pipe bomb" caused a scare Thursday at Ohio University that shut down four buildings before authorities learned the message was the name of a punk rock band, a university spokesman said.

The sticker on the bike chained outside the university-owned Oasis restaurant near the center of campus attracted the attention of a police officer about 5:30 a.m., spokesman Jack Jeffery said.

Police blocked streets around the restaurant and the Columbus police bomb squad came from about 65 miles away.

The bomb experts hit the bike with a high-pressure spray of water, then pried it apart with a hydraulic device normally used to rescue accident victims trapped in cars, acting Athens Fire Chief Ken Gilbraith said. Once they had it open, they saw there was no bomb.

The article goes on a bit; the area was declared safe, the bike owner was questioned and released, the punk band's label has no phone number. No mention if he gets paid for the bike.

Can you imagine coming out to get your bike and there is a pack of cops ripping it apart with a hydraulic device? Maybe he'd better stick with I Wish My Girlfriend Was As Dirty As My Bike stickers.
Posted by Matt at 3/02/2006 09:17:00 PM

I've got the same hook and elastic set up on my panniers. Try snugging up the elastic band. Mine was falling off last fall and I pulled the elastic about an inch tighter and it's been solid ever since. Just a thought.

I have that sticker, "This bike is a pipe bomb." Unfortunately, it's never caused such a stir.