According to Babelfish, that means Two Three Speeds.

If you're not into old bikes at all, this entry is going to be even duller than usual. If you have a passing interest, these bikes might be of interest. These bikes are a slightly different tack than the usual English three-speed bicycles. These are German three-speeds. They're called Rabeneicks, I'm guessing they're from 1958 or so (based on Sturmey Archer hub vintages), and they're down at One on One Bicycle Studio in Minneapolis (yes, that's Ein auf Einem).

The back story? I guess the original owner was in the U.S. Army in Germany in the 1950s, bought these there, and brought them home. It is thought that they weren't ridden much once back in the U.S. I am not an expert on this stuff, Rabeneicks seem to be ill-documented on the web (at least in English), but they look to be largely original. I thought they were cool when I first saw them in the infamous One on One basement, and asked if I could come in one Saturday morning, pull them out, and take photos. I did this yesterday. These are the photos and notes.

There are two of these bikes, a mens' and a ladies'. They are for sale for $600 for the pair, or $333 each, though it would be a pity to break them up after being together half a century.

Here are my photos:

(Note: as with almost all my photos, if you click on the picture you'll get a much larger version to better see the fine details) 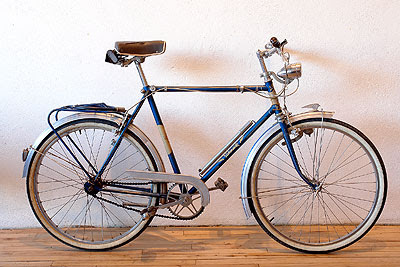 This is the Rabeneick Men's bike... 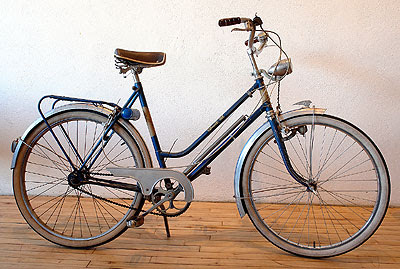 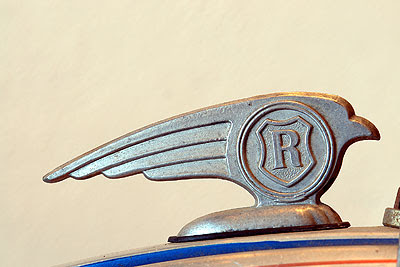 One of the things that immediately drew me to these bikes was the "hood ornament", a metal eagle on the front fender. It looks so Germanic! 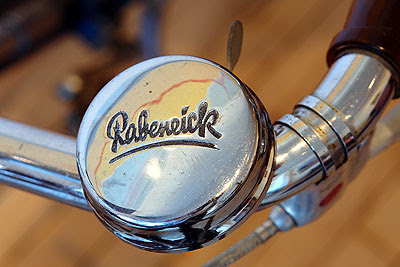 Everything's very solid, including the bell, with the Rabeneick name prominently showing. 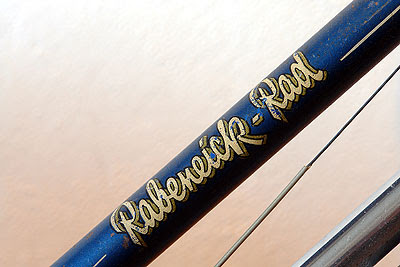 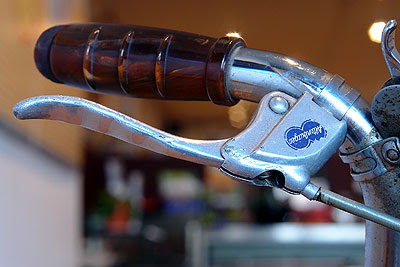 The men's bike has Weinmann 1020 brakes, the ladies' has one of those on back and an Altenburger sidepull on front. This is the brake lever for it. Both bikes had these Bakelite handgrips. 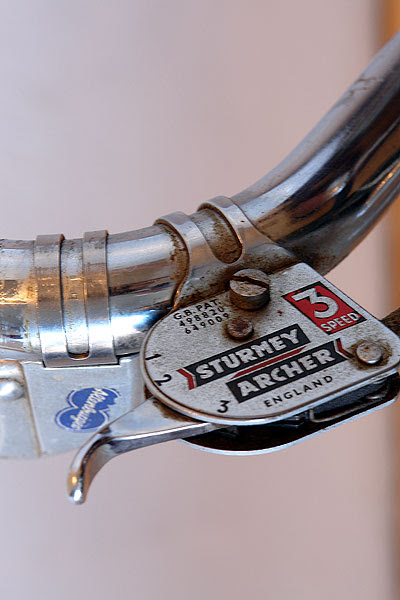 German they may be, but they're both Sturmey-Archer three-speeds. 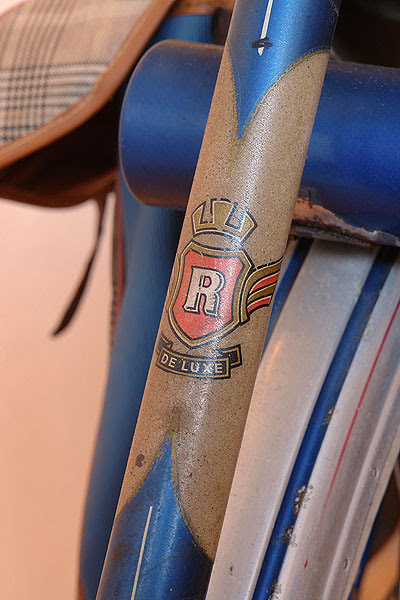 The ladies' bike has this seat tube decal. A feature I really like is the little tool box affixed to the frame, visible in the background. 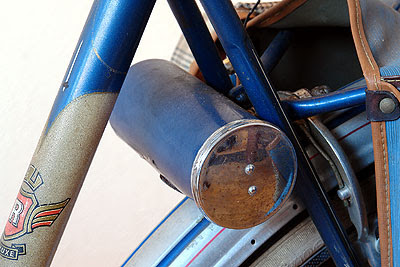 This is the toolbox. 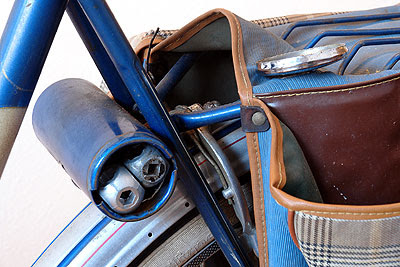 This shows the dogbone wrenches (literally, "Hundeknochenschlüssel", what a great language, I should have taken German instead of French in high school) in the ladies' toolbox. 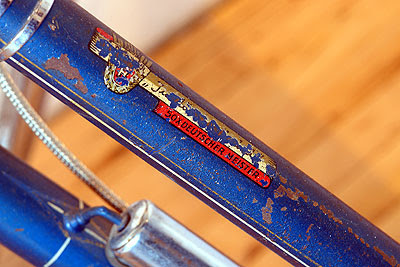 I don't know what this means. Neither does Babelfish. 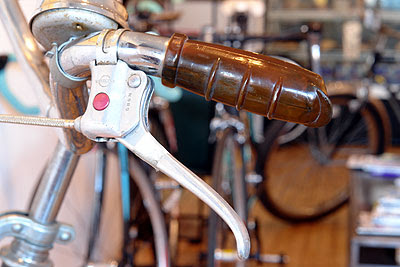 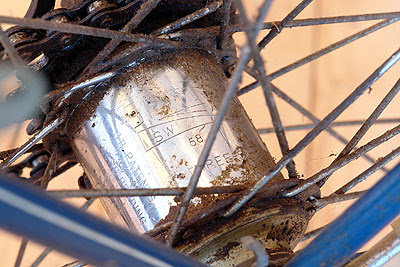 The ladies' bike has a 1958 Sturmey Archer SW hub. This was the replacement for the common-as-dirt AW hub but could be a finicky unit (the joke is that SW stands for Sometimes Works) and the AW came back into production, so that the one on my bike is a 1967 AW. 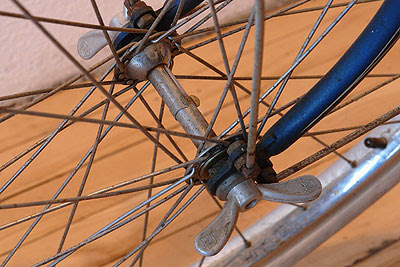 It's funny with steel stuff how slender things can be. This is the front hub. I like the wingnuts. 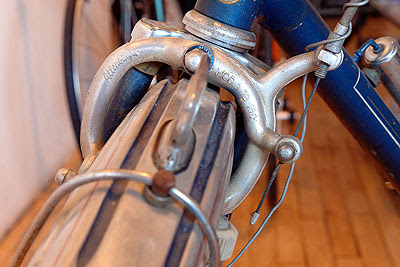 This shows the actual Altenburger front sidepull on the ladies' bike. 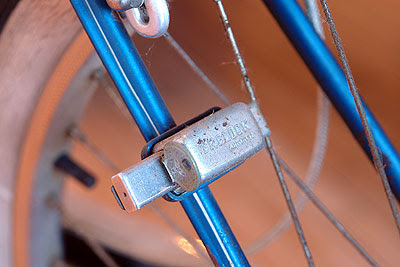 The bikes both have wheel locks. Nowadays, European bikes (and Breezer Uptowns) have these kind of "handcuff" locks--this one just sticks a bar in the spokes. It's called a Trelock Automat. 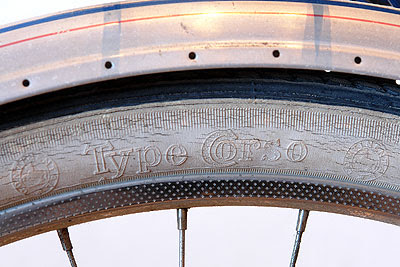 The Ladies' bike has Continental Type Corsa tires. Love these whitewalls. I think the ridges on the sidewall are to improve traction for the sidewall dynamos. Clever chaps these Germans! Also, the ladies' bike had all these holes drilled in the rear fender. It looks to me like it was to lace in a skirt guard. The men's bike doesn't have these drillings. Finally, notice the textured rim, little dots cut into the braking surface. 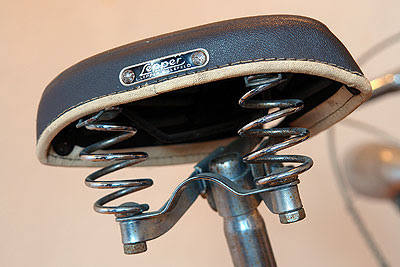 The saddle is an "L. Lepper, Beilefeld" unit. 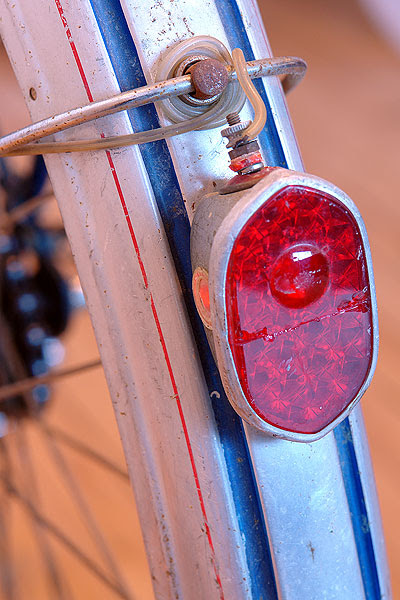 I love fender lights. I just ordered one for my Schwinn, though it's batteries and LEDs while this one's a bulb and dynamo. Even so, it seems to have side windows for better visibility to traffic. 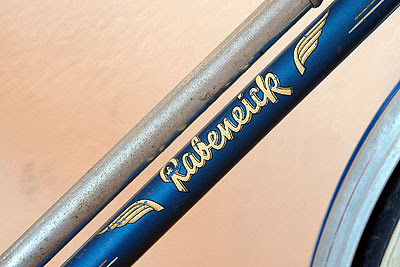 This is the downtube decal on the men's bike. This bike isn't Rad I guess. (Rad actually means "wheel" in German). 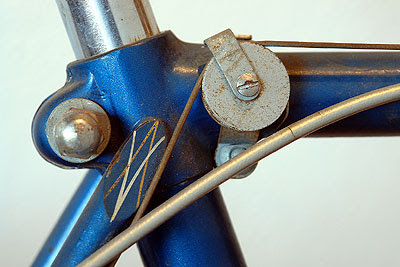 The cable routing for the men's bike takes the shift cable over a pulley. No cheesy English plastic shift pulleys here, boys, it's a metal pulley. 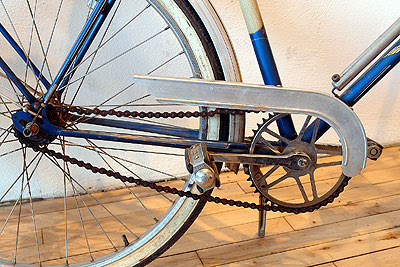 This is the whole drivetrain. At this date a swastika crankset would be out of the question, but they could have had more fun than this. Again, the steel components are very slender compared to modern aluminum or carbon components. 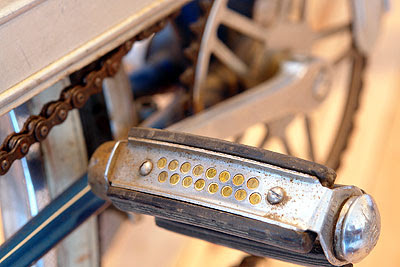 Even then they had reflectors in pedals. I don't know well these work, but they are pretty neat. 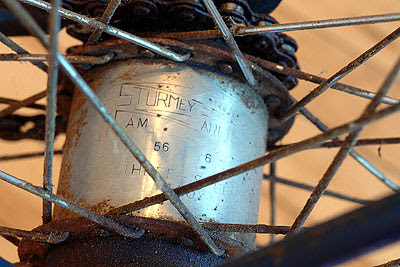 The men's bike has an alloy-shelled Sturmey Archer AM hub. The AM is the medium-range (the common-as-dirt AW is the Wide range). This is a 1956 unit. 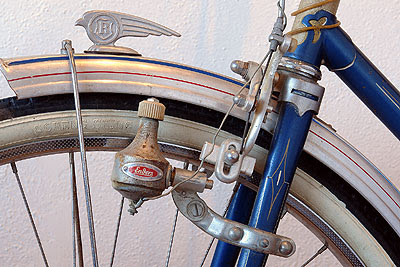 The 6 volt 3 watt dynamo. That's the same as current specs. 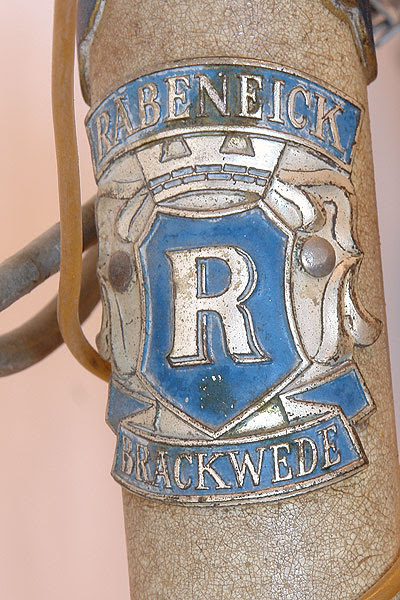 This is the headbadge on the men's bike. 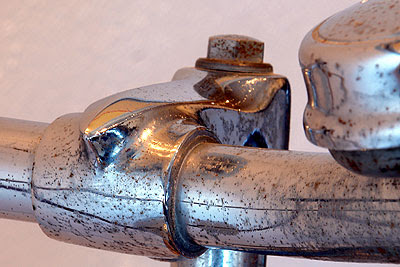 The ladies' stem is very plain, but I loved the sort of "ship's prow" casting (forging?) for the men's stem. 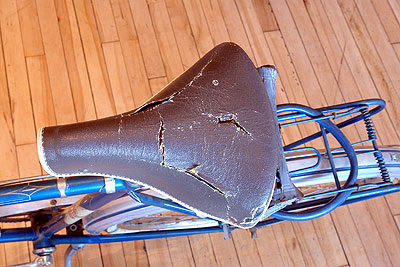 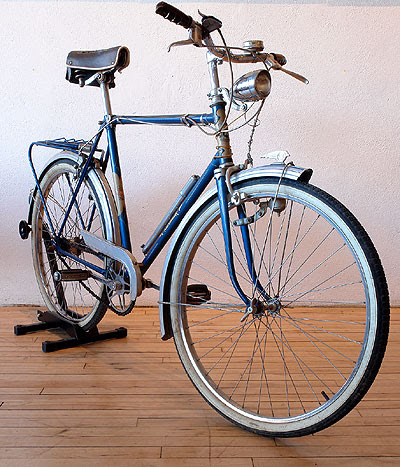 To photograph these I set them up at the front of One on One and just used the mixture of open skylight and incandescent. I had to move a couple of new Bianchi racing bikes to make space. Boy, was that illuminating! Having just hauled these battlecruisers out of the basement I picked up a tiny (probably 19") Bianchi carbon racing bike and it weighed about 4 pounds. I exaggerate, but it was extremely light, especially compared to the all-steel Rabeneicks.

Thanks to One on One for letting me do this. I bought a coffee and then lunch from them and they were very agreeable to letting me do this. I may do it again on other interesting bikes in their collection. Also, in case you are wondering, I have no business arrangement with them--if this entry hastens the sale of these bikes I don't get paid. I just did this because they looked like unusual bikes and it was kind of fun to do on a unique pair of cycles.

Finally, if you're deeply interested in photography, these were all shot on my Sony DSC-R1 10.2 megapixel camera using a tripod. They're at ISO 160 and exposures often ran more than a second. One some photos I filled in the shadows a bit by holding a reflector just out of view.
Posted by Matt at 3/11/2007 09:01:00 PM

Those are beauts! Regarding one of the stickers: I don't speak German, but "meister" is a loan-word used in Czech, which I do speak, and it means "master." Perhaps it means "50 times German master" as in that brand of bike has won 50 German championships?

you can BUY both of those for six hundred bucks? my gosh, what a steal! i'm lucky i'm not within easy ghost-riding distance of them or we'd have two more bikes in the stable. What beauts! Thanks for going to all this effort to present these photos.
patrick

Not sure about the 50X but Deutscher means German and Meister means Master.

As in Deutschland = Germany and Jagermeister means "Hunt Master"(Master Hunter) ;) I knew drinking would help me learn new languages...

great photos! actually rabeneick used to be one of the major cycle manufactures in (western) germany, settled near bielefeld (meantioned on the headbadge: "brackwede")like most bicycle manufacturer. they used to have their own race team for cycle races in (western) germany, when german riders were banned from international events like "tour de france". thereby "50 x deutscher meister" indeed indicates the winning of 50 german championships (= 50 x german champion), although - considering the bikes - it might be just a marketing gag. mentionable is that the term "rad" not only means wheel, it´s also the german expression for bicyle (like bicycle/cycle = fahrrad/rad)

Here's a german site with photos of various mudguard ornaments including some rabeneick bits
http://tinyurl.com/37aske

A family resemblance I think:
http://tinyurl.com/yuhdok

You know, I have a frame very similar to this bike with dimpled wheels and lot of other things that are very like these two bikes. I bought it at a garage sale. It isn't a three but a ten speed. I've never been able to find out anything on it. There is no name other than 'PanRacer' on the tubes with huge ugly decals which I think was a brand sold in America, probably by a departmant store, but the bike says, Made in West Germany at the top of the seat post tube. I didn't think much about this bike untill now and just by accicent have been planning to I bought for the frame which fits me like a 64 (25") frame but is actually only a 22 1/2" frame due to the very high bottom bracket. 11 1/2 ". The bike is so worn, rusted, and in such bad repair that I don't want to restore it to it's ten speed roots as it is simply filled with very cheap bad parts that I have no use for. I've got it listed on Flickr under Johnny435, my calling name, there, if anyone wants to see it.

Hi,
I just saw the pictures your 2 nice bycicles. As I am from Germany, I think I can help you with some translations. "Rabeneick Rad" means Rabeneick bycicle. "Rad" is a shortening from "Fahrrad", that is bycicle. The badge "50x deutscher Meister" means "50 times german winner". Rabeneick also produced racing bycicles, and apparently they were very successful at their time.
I hope this is of help to you.
Best,
Ralf

"Meister" has more than one meaning. Meister could be a master but also a champion. "Deutsche Meisterschaften" are simply "German Championships".

Wonderful review about that bikes. Thanks for the share. Very interesting and informative.

Thank you for these nice pictures!
I just like to add some little detail:
Above the "50mal deutscher meister" ist another writing, which is nearly scratched off.
Well, I have a very similar bike in my basement, in a much worse condition than these two beauties... just the writing still is still there. It says "Jubiläums-modell". Which means "anniversary model". Don't ask me, why this was written there, but maybe it can tell us something about the exact year of construction.

I also have a women's 3 speed Rabeneick Jubilaums model. Paint needs work since was stored near the ocean in a garage, but started out in good shape. I found the above information and great photos useful. Thanks. I am thinking of selling it, but want it to go to someone who would appreciate the nice details. Any idea what price range might be?

This is such an interesting blog. You are very knowledgeable about this subject. Please check out my site.
Carbon bike wheels