Due to some technical issues, I've been unable to blog (with photos, at least) until this past weekend. I've still taken a few photos, and here are some from August.

Earlier this summer my friend Paul used Amtrak to Winona as a way to cut a day off his ride back to Cedar Rapids. Annoyingly, he was compelled to box his bicycle up even though Winona's the next baggage stop down the line and Amtrak offers the roll-on, roll-off Bikes on Board service on other routes. Doubly annoying, when the Empire Builder train showed up, the baggage car had little bicycle logos that indicated it was equipped for the Bikes on Board. Grrr.

Move forward to the weekend of 11/12 August. I'm meteor-shower camping with my daughter Geneva, her friend Regan and the seemingly Zelig-like Paul at Lake Louise State Park near Le Roy, Minnesota. My son Henry is coming in off a church trip late Friday, so we had the brilliant idea to have him catch the Saturday morning Amtrak to La Crosse, we'd nip over and pick him up, and the weekend would proceed (we planned bicycle rides but events conspired against us, as you shall see).

This didn't go like clockwork. The night of 10 August there were major thunderstorms in the Twin Cities which caused extensive damage quite near our house (State Fairgrounds, Como Park). They also caused signal problems on the rail lines between Saint Paul and La Crosse, so the train, running an hour late into Saint Paul, was two and a half hours late by the time it arrived in La Crosse. My cell phone didn't get a signal near Le Roy, and we innocently turned up at the expected arrival time of 10:45. Ooops.

We had time to look around. The La Crosse station is nicer than the Winona one, though the Winona station, if you compose carefully, does look exceptionally cute: 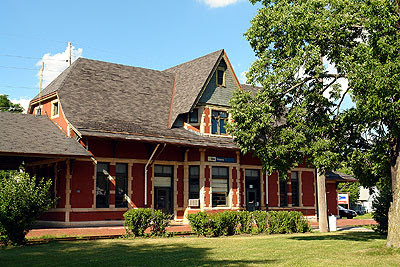 I took this while down for the Great River Shakespeare Festival in July, which would make another good excuse to train down and either ride or train home. For logistical reasons too complex to elaborate, my wife and son rode the train home after a Saturday matinee of Macbeth, which is when I took this photo. Note that those are train tracks right in front of the station giving it a precious Thomas Kinkade/Thomas the Tank Engine look, but the Amtrak actually stays on the main line which is behind me in this photo.

The La Crosse station is bigger. 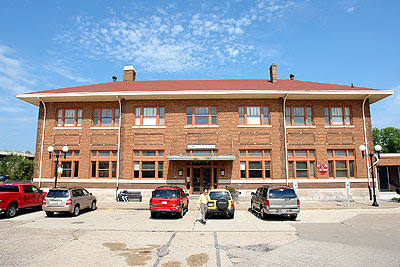 This being Wisconsin, it of course has a bar in it, and also the Train Station Barbeque. Paul and I ate lunch. We did a little shopping (forgot paper towels, bug spray, etc., how did the voyageurs manage without Target?).
La Crosse apparently requires bicycle boxes too. There was one atop a baggage cart waiting out on the platform: 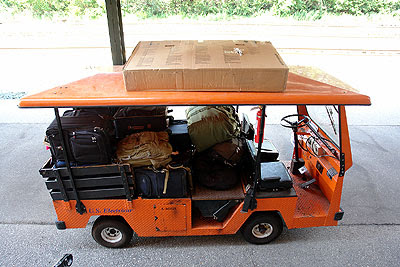 Bicycle boxes often seem to be ill-fitting. My huge Atlantis might be a problem: 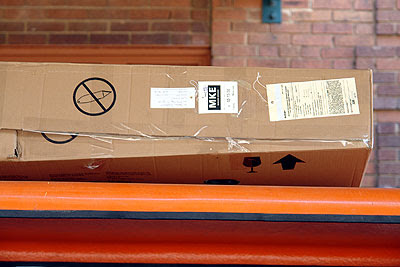 Finally the train showed up. Regrettably, the baggage car did not have the bicycle logos. I guess we can't count on the availability of the Bikes on Board capability on the Empire Builder, thus Amtrak's insistence on a box. 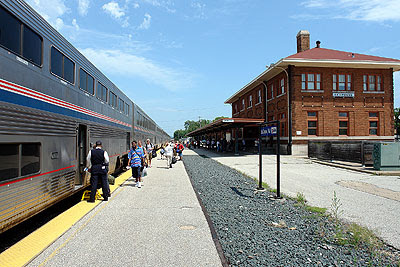 I've thought about Winona as an out-and-back, Amtrak down, ride home. Jim from Hiawatha did it with a couple of friends and rode it home in a day. This works nicely if the train's on time and the day is long, though they rode until well after dark. I'd thought of it more as a late September/early October, down on Saturday morning/back Sunday evening with an overnight in Red Wing. If Winona wasn't enough miles for you, you could go to La Crosse instead and try that, though Paul, who has ridden all this, says Winona to La Crosse on the Wisconsin side is mostly a crushed-limestone trail and not worth it.

Anyway, with this idle interest I was happy to visit the La Crosse station and see what it was like. When the train finally showed up, Henry popped out, we fed him some barbeque and drove back to the park, through La Cresent and Hokah, towns that a week later would be flooded in major rainstorms.

Additions to the Fleet

The kids' high school is a little over a mile away. Last year Henry rode his bicycle fairly often in the warmer months. Now Geneva's starting there too, and I figured I'd get her a three-speed to ride rather than her nice Schwinn 24-speed. We chose one from Sunrise Cyclery that Jamie was going to tidy up for us (it wouldn't hit all three gears) and we'd go back and get it.

I the meantime, August 25th I was in Des Moines doing the League of American Bicyclist's Road One course (a pre-req to getting the LAB League Certified Instructor rating, which I'll do down there in September). My cell phone rang. Who'd be calling me there? Some grievous accident up in the Cities? I answered, and it was my boss, calling from a garage sale where they had a Dunelt men's bike, was I interested? A few questions, and I said yes, and got it Friday. It's a bit small for Henry, who, though not yet as tall as I am, is getting darn close, but he liked it and was completely taken with bottle dynamo which does a great job on the rear light, though the front one isn't working at the moment.

Here's Henry on his Dunelt. It's be a bit small to ride coast to coast: 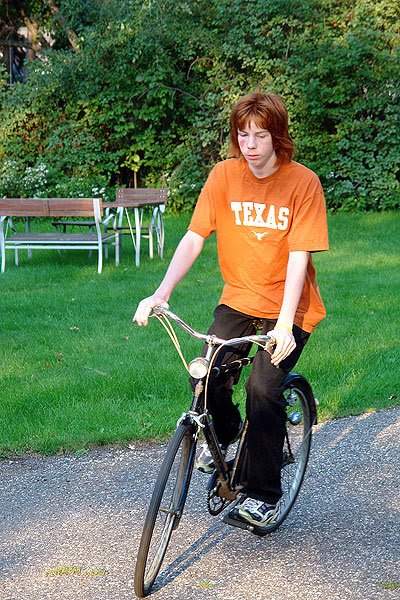 Meanwhile, time dragged on with Sunrise. I called to check on the status and Jamie seemed a bit confused about which bike it was. Geneva was exhibiting remarkable excitement about getting a three-speed, so Saturday I drove over. There was a Dunelt there for us. I'm pretty certain it's not the one we tried (which had an odometer and a headlight), but it looked ok, and I went ahead and got it. Geneva was thrilled. Here she is on the bike: 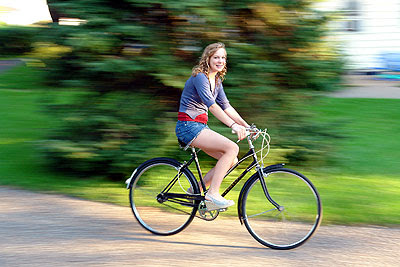 Isn't she lovely? The New York Observer just ran an article about Beautiful Women on Bicycles and there's a whole blog called Copenhagen Girls on Bikes. People are noticing: girls look great on bicycles. Of course, Geneva's been lovely since she was born, it doesn't take a bicycle to do it, but I am tickled that she (and Henry) is so happy to have the bicycle to ride to school.

It also seemed nicely circular. Saturday was my fiftieth birthday. Forty years ago, 1967, I got a three speed Columbia Tourist for my tenth birthday and was also tickled. It was cool to be exactly four decades later and have an old three speed thrilling my daughter ("Look, Dad, I can ride with these shoes!"). She also has new braces, new glasses and her first perm. Life's getting exciting!
Posted by Matt at 9/04/2007 09:57:00 PM

Your kids are really growing up fast!

That's a great photo of Geneva.

A very happy birthday to you. Nice to know that I will always be a bit older than you.

How old is the Girl??