I think most cyclists who spend much time out in the world have the experience of getting yelled at by passing cars from time to time. A lot of the time it's unintelligible and these days I always just smile and wave. Saturday I was riding down to Regina's Candies to get some Easter loot, a common springtime ride for me, and went down Lexington through Como Park. I was using the bicycle/pedestrian sidepath and clattered across the intersection where a couple of cars were waiting. The guy in the orange car came around the corner and yelled "Nice Stop!" as he accelerated past, showing his aggravation.

Late last season I got a Fly6 rear light/camera combination, about which I have mixed feelings, but I've been using it and it was running as I went past Orange Car guy. Here's a still from the video: 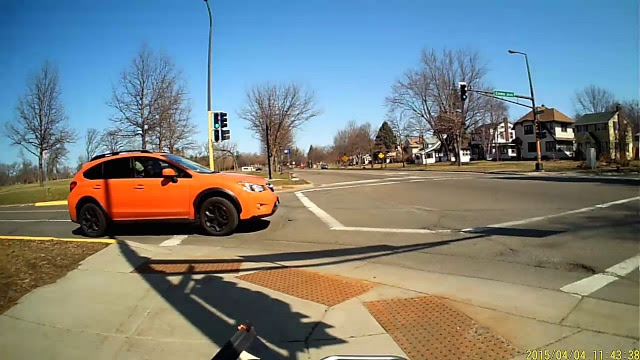 You can pretty clearly see that I've got the green light. Not quite discernible in here is that I also have the pedestrian Walk signal. I had to swerve around Orange Car guy because his extensive driver training apparently omitted the part about where you're supposed to stop for a traffic control device. It's not uncommon to get yelled at for doing perfectly legal things, like, you know, riding in the street, but I particularly liked getting chastised by someone because I didn't stop when I have the green light!

I expect there'll be more morons this season, but the first sighting is always a welcome sign of spring.

Happy Riding everyone! And remember to stop at all those green lights!

I like your response. Smile and wave. Either makes them mad or just confuses them more. A win regardless!