I went on a bike ride with my daughter Geneva, a junior at the University of Minnesota in the Honors Program in English and Political Science. She's liked bicycling for a long time, notably since the second day of our 2005 ride to Duluth when she was 11 years old and said, "Dad, I think to do this you have to love cycling. I think I only like it."  Well, she's been riding to her job at the U nearly every day (using my buddy Paul's Rule of Commuting: "If it isn't actually raining at the time you leave, ride. It'll be ok") and wanted to do a fun ride. We meant to do the Bicycle Alliance of Minnesota's train to Big Lake and ride back last Saturday, but the big Friday night storms dropped a huge tree branch onto, and in bits, into, our garage and two vehicles, so rather than ride with BAM we spent the day chainsawing the tree and uncovering the cars.

We decided to do the ride this Saturday, June 29, instead. So, Saturday morning, after the insurance adjuster was here taking photos, measuring things and making estimates, we rode from home down to Target Field, where the Light Rail terminates and, two floors down, the Northstar Commuter Rail ends as well. We got our tickets, took the elevator down, and waited a few minutes until the train showed up.

(Just as a reminder, the photos in this blog all are links to larger versions of the pictures. If you're deeply interested, just click on the photo)

The Northstar train cars have a couple of bike parking spots on the lower level of each car. You basically nose it up to this yellow strap and secure the bike so it doesn't roll around. I'm not sure how this works without kickstands; we both have them, and it worked fine, though the yellow nylon strap ends were frayed and a bit of a challenge to get through the metal buckle. 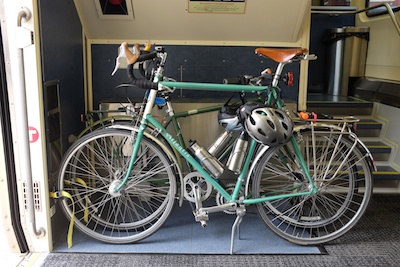 The train was really large and largely empty. Here is Geneva in her seat with the bikes visible in the background. We didn't notice upstairs until the end of the trip, but they have tables between facing seats up there. 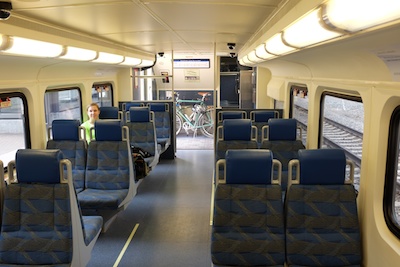 The train was so big (eight cars, two engines) because there was an afternoon Twins game on. I guess they haul a lot of people down to the games, which must be extremely convenient since the Minneapolis terminus is at the ballfield. This warning sign was up, though; don't stick around for rain delays or extra innings, 'cause the train is out of here on schedule! The Northstar line uses regular Burlington Northern Santa Fe tracks and must have scheduled time slots for their runs, hence their need to stick to schedule no matter what's happening in the game. 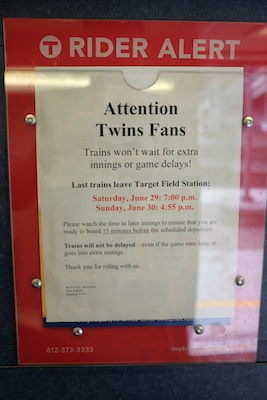 Geneva and/or I have taken trains to fun places like London, Paris, Geneva (the city, not the daughter), Chicago, Portland and now, Big Lake! Another cyclist guy on the train took this photo for us. He was going to ride around for a few hours and take the train back; we were going to ride home. 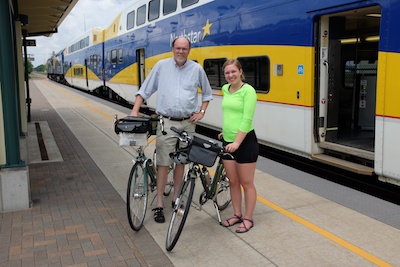 The Northstar uses the MPXpress MP36PH-3C locomotive, two of them for these longer trains. (If you want to pinch one and take if for a ride, the manual is here). When it left Big Lake headed back south, it would presumably fill up with Twins fans on what was to prove a spectacular day to be at the ballpark and a Twins win 6-2 over the Kansas City Royals. 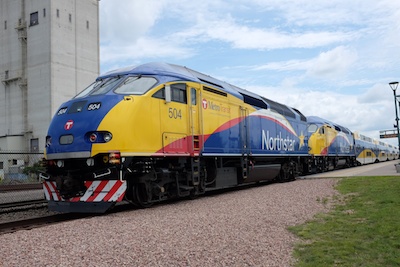 We used the Bicycle Alliance of Minnesota's route to get home, which first took us to Elk River down County Highway 14. We basically followed the Mississippi River, on the east side until Elk River, then changing to the west bank the rest of the way into Minneapolis. This photo is of Geneva on County 14. 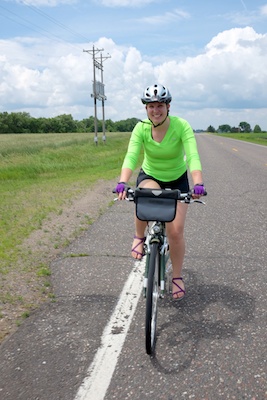 All our rivers are high after this very wet spring and early summer. This is the outflow from the dam just above the confluence of the Elk and Mississippi Rivers. Those black bits are birds, swifts or swallows, excitedly flying under the bridge and back out. 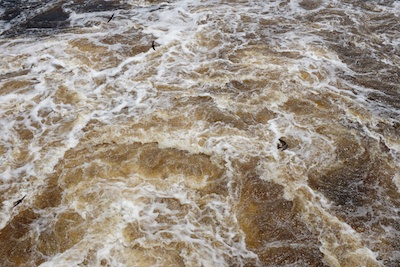 After lunch of a too-large 1/3-pound burger at Daddy-Os in Elk River (memo to file: next time, split one between us), we crossed the Mississippi and headed south. As we came up on Dayton, I thought it looked vaguely French with the chruch steeple sticking up and took this photo. Turns out it was settled by French people and the Church of Saint John the Baptist took confessions in French into the 1950s. 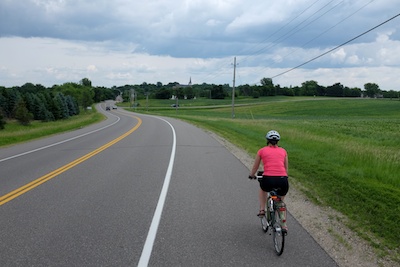 The current church building was built in 1904. It's quite a looker, as churches go. 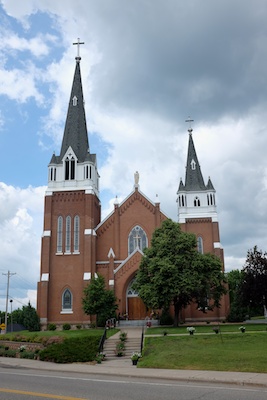 Just south of town there was what looked a bit like an abandoned plantation with these out on the gateposts. It's ok, though, they're white! Norwegians, probably. I'm not sure what the scoop is on Elsie Stephens, but I read that Dayton is buying the 23-acre estate on the Mississippi to add to its existing park. 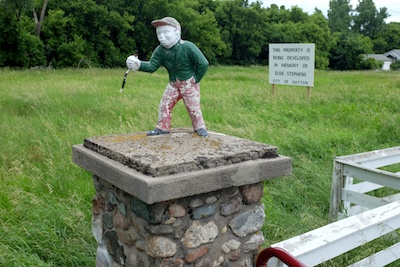 Of course, I live in a house that ought to have "Gone With The Wind" doorbells, but I'm not sure lantern jockeys would go down well here in the Cities. Still, this looks like a nice property. 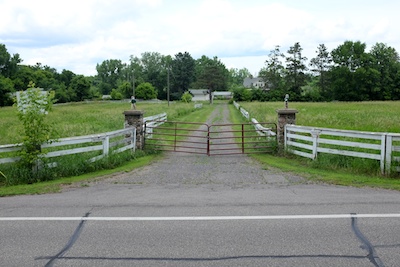 The park adjacent to Elsie's farm is touted as the Cloquet Island overlook. I'm a sucker for these sorts of things, so we stopped for a look.  I don't know, I'm no outdoor recreation professional or anything, but I think a bit of judicious undergrowth trimming might enhance the view: 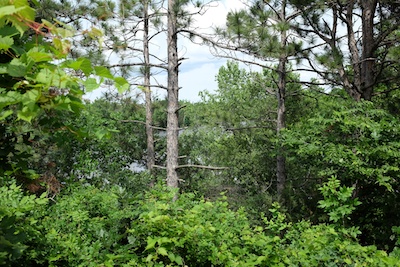 Maybe it looks better in this state of mind: 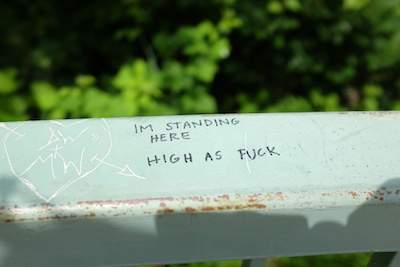 We pressed on, me watching Geneva disappear in the distance, then waiting for me. I gotta work on her bike, adjust the brakes so they rub or something, the girl's getting too fast for me. We stopped at the Coon Rapids Dam. Normally you can walk or ride across the dam to cross the river, but this summer it's closed for some work. 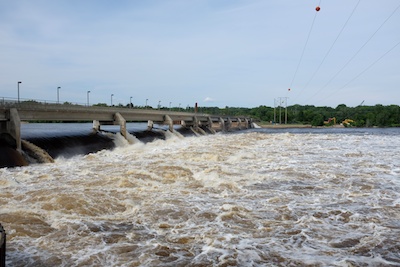 Geneva enjoying a Gatorade and hoping she doesn't start sweating green like in their ads. 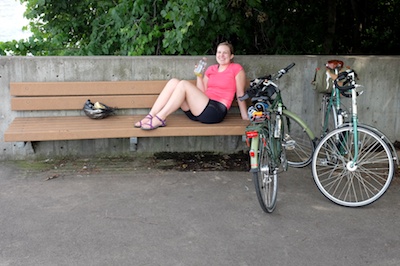 The ride down through north Minneapolis isn't the most charming, though I now know where to take any copper pipes and wire I steal out of foreclosed houses to finance my meth habit. It quickly turned from grimy industrial to hipster, then we crossed the Mississippi back to the east bank on the Stone Arch Bridge, an old railway bridge now used for bikes and pedestrians... 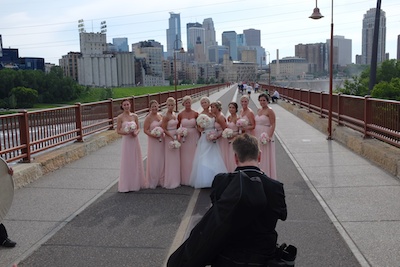 Don't worry, girls, you can always use those dresses for, you know, cocktail parties and, well, stuff.

Ironically, the next bridal party waiting to get shot is beautifully lit by the evening sun. It's only when they line up to get the skyline in the background that they get that awful backlighting. They should do this in the morning. 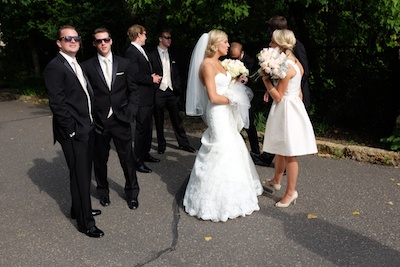 And then home. My bike showed 59.55 miles on the day, a good outing, and more than I usually ride in a day. It was great fun to get out and ride the Northstar for the first time, then ride back along roads I haven't ever driven even after 19 years living here. It was cool to see small towns and rural areas yield to exurbia, suburbia, inner city industrial, hipsterville, and old urban core in one long continuous stream. I think it would be a terrific ride in the fall though you'd want to watch your sunset times. The BAM ride was advertised as 41 miles, that being Big Lake to a Park Department parking lot at Broadway and the River; the rest of our miles were riding to and from downtown Minneapolis. I'd recommend you give it a try some lovely day.
Posted by Matt at 6/30/2013 06:44:00 PM

Yeah, that's a formidable-looking group. And it's the happiest day of her life, too.