Something old, something new...

My son Henry, 21 years old and a shade taller than my 6' 5", needs a bicycle every bit as tall as mine. By happy coincidence, in 2009 a guy in Utah, having read this blog and some of my whining about needing tall bikes and the difficulty of finding them these days, e-mailed me to say he had a stripped tall Fuji steel frame and he'd give it to me, all I had to do was pay shipping. Sure! So, about $45 later, I was in possession of a big huge tall Fuji frame scraped down to bare metal. 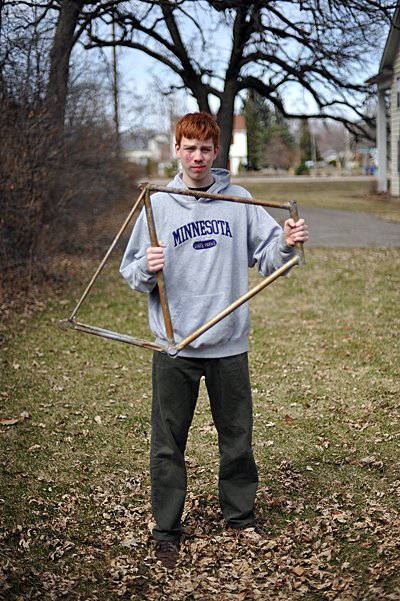 Henry holding the Fuji frame as we got it, April 2009 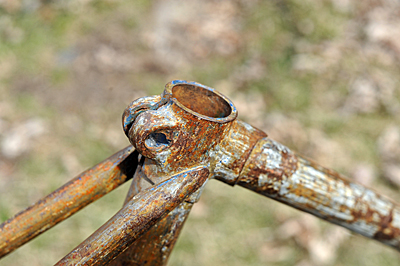 The condition of the frame as received. It looks a bit like rusting shipwrecks on Guadalcanal from 1943. I had the paint people sand blast the frame before painting.

It would be exaggerating to say we swung immediately into action on this. I did have the bottom bracket shell and headtube faced so that the opposing surfaces were parallel. I didn't, but should have, dragged the frame to some local framebuilder to get a couple of water bottle mounting bosses brazed on. This would have been trivial when it was still bare metal. I did take it to a powder coating place over in Golden Valley and had it painted a nice, fairly nondescript blue-gray color. In went a sealed-bearing bottom bracket and some cheap headset, and then the bike sat in the garage.

Henry in the meantime got taller than he was in 2009. He has a utilitarian Novarra Transit 7-speed internal hub bike that's a bit too small. He rode a mid-1980s Trek 620 until he got right-hooked and bent the fork. He got a Brompton H-model (the tall Brompton) from his grandmother. And finally, this summer, we decided to finish the built-out on the Fuji.

It's a funny mix of parts. The Fuji frame is probably from the late-1970s, which I infer from a) it's enormous size (68cm) b) it's complete lack of braze-ons and c) it's recessed front dropouts, a precursor to the 1980's "lawyer lips". Appropriately, some of the parts date back to the 1970s as well. The front wheel, for instance, is built on a 1977 Phil Wood hub, the very hub that appears in my Bike Touring Circa 1980 photos. The saddle is the Brooks Professional that came on my 1975 Motobecane Grand Record. The rear rack is a 1984 Blackburn, before racks had adjustable seatpost attachments. The rear wheel is from the Trek 620, the sidepull brakes were new because the Trek had cantilevers and this bike didn't have cantilever studs. The seatpost is new (different sizing than the Trek), the front derailleur is new, the Moustache bars were from an experiment I tried with my Atlantis, and the Honjo hammered fenders I just had lying around. The Honjos were, as usual, fiddly to install, and I had to fabricate a couple of brackets for the front fork mount and the brake bridge attachment point. In the end, though, we got this: 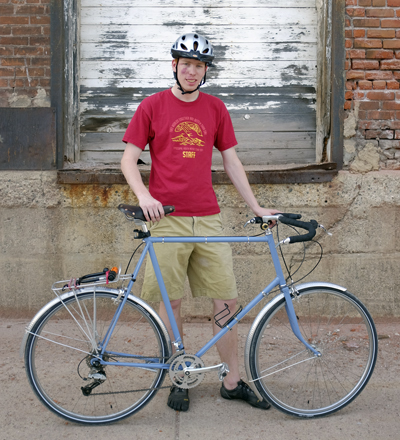 The Coolest Bike in Winona

It's hard to classify, with classic and modern elements, but in the end, it comes together nicely. It still looks 1970s, especially with the clamp-on water bottle cage holder (and I didn't have a silver cage that worked with these clamps on hand, hence the black cage), the three brake cable housing clamps along the tob tube and the seatstay clamps for the rear rack. The black fixture low on the seatpost is an attachment point for a Burley Travois trailer.

Here's Henry riding it. Note the good leg extension on the down-pedal: 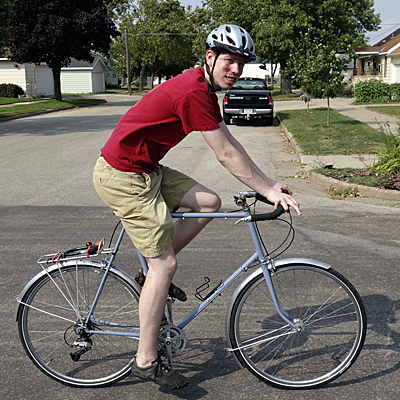 In the end, we're probably into it for $500 plus of course whatever sunk costs there were in parts lying around in the garage. That's a good value considering it's a pretty decent bike in a size that's very difficult to source these days.
Posted by Matt at 8/21/2013 08:20:00 PM

Hi Matt read with interest your blog about cycling in the 1980's, brought back old memories of my cycles at around the same time. My cycling was a bit different to yours in that my bike was a single speed black raleigh, with sleeping back and tent my main luggage , no camera, or other visual equipment to record my journey, but did bring diary and sketchbook. and certainly no helmet. am still an avid cyclist and still no helmet. will read through your blogs with interest 'stephanie.