Thursday's golf league at work, so I never ride to work on Thursdays (well, I might in September, as our golf league ends at the end of August). My weaseliness is driven home by the constant stream of cyclists going by on the road which bisects the course so that we cross it between holes 3 and 4 and again between 7 and 8, and play along the fenceline on 7. I happened to be along the fenceline where my drive had gone when this guy came by. I'm on the seventh hole of the Executive 9; that's the fourth hole of the short 9 across the road. That was always a hazardous hole for me as my slice would carry my drive into the road which could be fairly hilarious depending on the passing traffic. 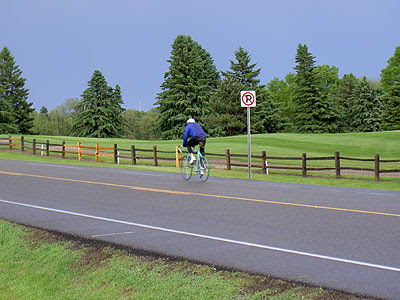 Crossing between 7 and 8 a scooter and car were approaching from the right. The scooter slowed down and stopped, which meant the car had to as well. The car honked his horn at the scooter, and the guy turned around and pointed at the Crosswalk sign as we walked across the road. Traffic's required to stop, though it pays to be a prudent pedestrian because often it doesn't. I yelled "Thank you!" to the guy. Us two-wheelers have to stick together.

We had been caught in a thunderstorm when at the far end of the course and waited it out. It had passed by the time this guy rode by, which is why the road is wet and the sky so dark. Weirdly, despite the rain and delay waiting out the storm which even dropped hail on us, I scored the best golf score I've ever had at Gem Lake, a 40. The prior weeks have been very consistent, with 55-53-55, so this is a massive improvement. I'm happy with this, but then I was happy with the 55s, I'm not a serious golfer. I expect I'll be back in the mid-50s next week. I took some photos during this afternoon's game which you can see at Golfing Like Hail if you're bored.

In a couple of weeks there is going to be the Great River Energy Bike Festival which includes a series of five races from Wednesday June 8 to Sunday June 12. I'm volunteering in Saint Paul June 8, Minneapolis on the 10th and Stillwater on the 12th and would encourage anyone reading this (all four of you, hi Dad!) to go watch a race or two and to volunteer. The course marshall stint is pretty simple, you wave a flag and blow an annoying whistle to keep crowds off the street when the peloton is coming. Last year I did this in belting rain that delayed the races for most of an hour. In a show of manliness, one of my buddies is riding his bike up from Cedar Rapids, Iowa, to hang out and also volunteer on the same days (leaving Thursday and Saturday open for heavy drinking).
Posted by Matt at 5/26/2005 11:15:00 PM