I had a busy couple of weeks up through the Thanksgiving weekend. I flew to Boise, Idaho, the weekend before Thanksgiving to give a deposition in a legal matter, returned, then we all drove down to Iowa to my sister's for Thanksgiving. She lives in an old (1850s) farmhouse in a valley a few miles upstream from the Mississippi River. I won't go into detail on the weekend, it had virtually nothing to do with bicycles (other than admiring a Schwinn World Sport 10-speed my brother-in-law got for $17 in nice shape but with a profoundly uncomfortable seat).

As much as I love cycling, as much as I love the freedom and joy I get when out riding, I also like driving. Driving to Iowa is a beautiful run, down the Mississippi along Highway 61, crossing at Lacrosse, then down Wisconsin 35. We usually stop in Lacrosse. There's a coffee and candy shop on Pearl Street where they sell candy cigarettes. I believe these are illegal in Minnesota, so we stock up. 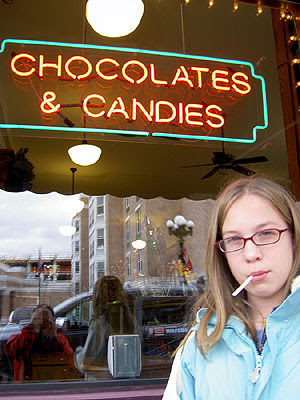 Here's Geneva looking tough putting on her Lacrosse-bowling-league-after-work-at-the-brewery face. I noticed that the candy cigarettes have become more politically correct; unlike last year, they are called Candy Sticks, not cigarettes, and no longer have a red end like a glowing cig. We always get here after Halloween, which is too bad, these would be great to give out on Halloween.

I like the fallowness of the land, I like the starkness of the light, the sense of foreboding of winter. I like Thanksgiving, largely free of religious or commercial overtones, just family and friends together thankful for our many blessings. I won't go on about it.

However, at one point, as we were about to set out somewhere in my sister's car, I noticed a 2005 Iowa Transportation Map for Bicyclists published by the Iowa Department of Transportation. I looked at it and asked if I could keep it.

This map is pretty cool. It is in essence a duplicate of the regular Iowa Department of Transportation Transportation Map but with the roads marked differently. Rather than color the roads strictly by their legal designations (Interstate, U.S. Highway, State Highway, County Road), the color is by the Annual Average Daily Traffic (AADT). The most interesting roads are the purple ones, with AADT of 0-700 vehicles. This encompasses most of the excellent and extensive County Road network that criss-crosses the state. In addition, the AADT color is black-banded when the road has a minimum 4-foot paved shoulder or bicycle lane. Green dots indicate bike trails under five miles in length; numbered green dots indicate trails over five miles in length, with additional information on the back of the map. Also on the back of the map are the usual city maps showing bike trails in the cities, some rules of the road, suggested trail etiquette and the clever ad, Bike Helmets: Don't hit the road without one.


The Transportation Map for Bicyclists version: 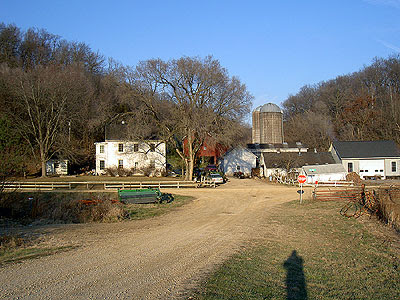 The photo is of my sister's farm. Jackson County D57 is crossing the photo, and is hard gravel like the road I'm on. You could ride it, I guess, but gravel roads aren't always very pleasant depending how deep and fresh the gravel is. The Map for Bicyclists is wise to leave it off as a good route.

It's cool that Iowa has done this. I pretty much grew up there so have a soft spot for Iowa and Iowans who are generally overlooked and underestimated. I certainly see that here; one of my theories of populations is that every state makes fun of the state south of it. Who knows what they do in Louisiana? For all the cool cycling culture and cutting-edge attitude in the Twin Cities, Iowa has done this nifty map, hosts the cross-state RAGBRAI ride each year and has a terrific network of county roads that make it a marvelous place to ride. If your two-wheel travels take you that direction, I'd recommend picking up one of these maps. You can order them from the DOT Iowa Bikes site. Have fun!
Posted by Matt at 11/30/2005 05:48:00 PM

Not only do they host Ragbrai and have great roads, they have some of the nicest people around. Thanks for sharing.

I wish PA would come up with something similar.

They have some bicycling routes and the associated signage but nothing like that map.