Halloween this year gave a sudden lurching realization that my children are getting big. As a kid, I did the usual Halloween stuff, costumes and trick or treating (and, for my Des Moines years, the oddball Beggar's Night). Once I was through college and in an apartment and then in a house, I delighted in giving away full-sized candy bars rather than the snack size. Once we had children, I began to take them out for Halloween in a succession of cute costumes. Henry in particular would put forth unflagging effort in collecting free candy as we'd range far and wide through the neighborhood. Last year Geneva for the first time kept up with him through the whole evening and they each collected ten pounds of candy (we weigh it each year). Last year, while I strolled along, there was someone on a bicycle who rode by a few times in a strange costume with an enormous head that looked like it was made of paper mache. They didn't say anything, they just rode past and waved, up and down the streets of the neighbourhood.

This year, Henry still wanted to go trick or treating but Geneva didn't. She wanted to hand out candy and see all the cute kids in their costumes. I thought back to the guy on the bicycle and to a classic skeleton costume we'd made for Henry ten years ago and thought, that'd be fun. I could make a skeleton costume, ride my bike up and down the streets, put a pumpkin on the rear rack and give out candy!

So, I made a costume. The top is a cheap XXL black long-sleeve t-shirt from Target, the bottom a pair of old black Levi's. I cut out bones from fusion interfacing and ironed them onto the garments. I also bought white and black face paint to make my head look like a skull. Finally, I have a white helmet liner made for use in the summer to reflect sun and wick sweat; that would serve to keep my head warm. Some thin black gloves would keep my hands warm.

Karla had bought five pumpkins. I carved a couple, including one about the right size for the bicycle basket. This Wald basket is one we have lying around which I zip-tied to the rear rack of my Marin Pine Mountain Urban Assault Bike. I initially set up the pumpkin with an REI candle lantern, for a couple of decades my preferred source of light when camping.

Here's the pumpkin mounted and ready to go. This is my Marin Pine Mountain, not the Atlantis. This bike has fat 26" street tires on it, all the better for pounding over obstacles I can't see in the dark. The basket is zip-tied to the rear rack, the pumpkin wedged in place against the front of the basket, and a yellow bungee cord holds the pumpkin down and the lid on. 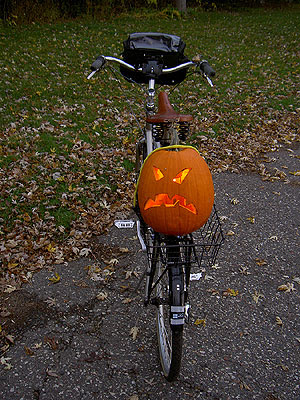 Here's a closer shot of the pumpkin. 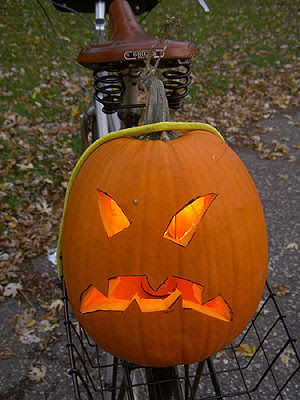 The light to start with was from an REI candle lantern. I cut a couple of slots in the pumpking and the lid held the wire bail in place. I had high hopes for this arrangement. 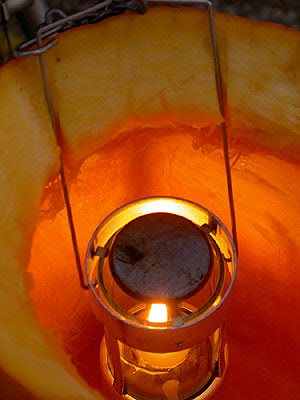 About 6:30 we set out, Henry wrapped in yards of muslin as a Mummy, me in my skeleton outfit with white skull-head and pumpkin. 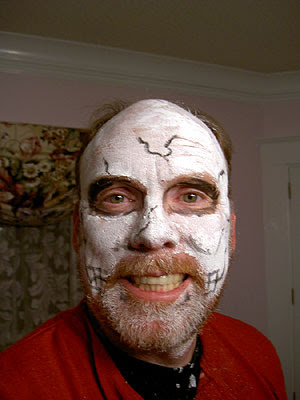 Hello, little girl, like some candy? This is my skull makeup at the end of the evening. My beard kept me from getting the whole jaw really white. Still, at a distance, the effect was good.

I soon ran into technical difficulties with the pumpkin. The candle kept going out. These candle lanterns work great even in pretty wet and windy conditions when camping, but something about the bike was giving the candle trouble. I wonder if it was sloshing wax from stops, starts, bumps and turns, something it doesn't have to deal with when camping. I'd stop and re-light the candle lantern but kept having to check over my shoulder to see if it was still lit.

After a while I rode home, took out the candle lantern and instead put in four LED blinkie taillights all set to steady on. This worked great. The light bounced and reflected around the interior of the pumpkin and gave a good strong orange-red glow out the carved face. (Later, when the evening was done, I tried putting all four lights on blink, and that was even better; they all blink at different rates, giving this flickering effect).

Thus equipped, I rode around. I startled a number of people. I think I startled a lot of drivers. Clad in black, I was unwilling to ride in front of people who had a Stop sign, worried they'd coast on through and hit me, so I'd so a right turn. The poor driver would be coming up to an intersection when suddenly this enormous skeleton on a bike would come looming around the corner. A couple of adults I talked to (during brief pumpkin maintenance stops, or when stopped to give children candy) said the effect was very startling. I would have liked to see what the pumpkin was like from a distance, since it would roll down the street, around corners, and probably looked pretty odd in dark areas since I was showing no rear lights at all.

Halloween's a great night to ride around. Part of the fun is how open and lit up people's houses are; you can see in, check out the neighborhood. It was fun when I'd walk with the children to note who was nice and who was grouchy, to see people come and go, who was cheap and who generous, even who was really stingy, like the year one guy gave out poems. I didn't shadow Henry this year, instead ranging far and wide through the Como neighborhood and even riding around the Como Lake. I was hoping I'd see the big-headed cyclist from last year and rode some of the same streets but there was no sign of that person. This was too bad, I'd like to have heard how they came up with the idea.

I got one treat; waiting at a corner, a guy came out who'd seen me ride by and said, you're working hard tonight, here's a treat and handed me a bottle of Bass Ale. Hot damn! Beer trick or treatin'! It was unopened and I kept it until the night was done.

Here's Henry and I at the end of major candy operations. The strips of reflective tape on my read fender sure work well in this photo! Henry's mummy costume was getting pretty ragged. At one point I'd ridden by him and a dog had come out of a house and was tugging on a loose piece of wrapping. Despite his costume malfunctions and attacks by vicious canines, he collected 12 pounds of candy, a really good outing. 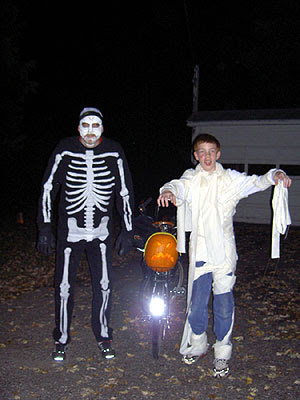 My costume was inspired by one we did for Henry ten years ago. Here we are then. 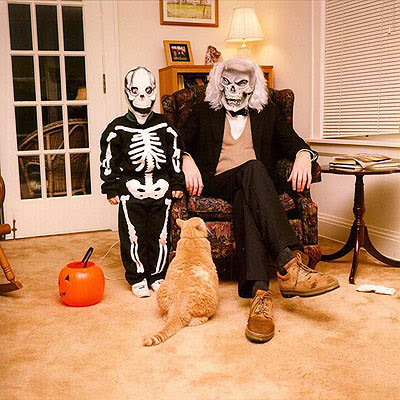 Here I am with my bottle of Bass. Next year I think I'll do hand bones as well, so the arms don't just end at the gloves. In this picture, lit with the camera's flash, you don't get to appreciate the lurid red glow of the blinkies in the pumpkin. 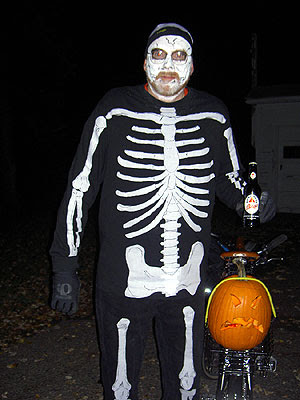 I had my first SPD crash. I'd felt pretty smug about going clipless this summer with my SPD pedals on the Atlantis and the Marin and never having the inevitable crash new SPDers are supposed to encounter. Since getting the Atlantis, my miles on the Marin have been pretty limited. The pedals on the Marin, some Nashbar-brand SPD on one side, platform on the other, have a lot tighter releases than the Ritcheys on the Atlantis. So, I come up to an intersection where there is some traffic confusion and slowed way down and then stopped and my foot wouldn't release and over I went. As I fell, I'm thinking, great, I haven't crashed in years, and here I go on one of the few times I'm not wearing a helmet. Crash! Predictably, as soon as I hit, my shoe released. I scraped my knee and banged my elbow but other than that my main injury was to my dignity. Fortunately, in skeleton costume nobody knows who I am! Crash? What crash?

Riding like this is not for the faint of heart. I usually try to be very visible and now I was riding around in black with no front lights on a night full of oblivious pedestrians and distracted drivers. On the other hand, I was generally meandering at a stately pace, not pushing to make time, and so could pay lots of attention to being cautious, avoiding drivers, etc. I'm thinking next year I might do it again but cruise around more of the city, not just up and down the streets of our area. It would be kind of fun to go up and down Summit, ride around Crocus Hill, maybe even pop down to Concord or Lake Street where the skeleton motif would fit right in with the Dia de los Muertos theme. Skeleton-costumed cyclists riding around with pumpkin taillights giving out full-sized candy bars to little children has to win us some goodwill, right? Plus, it's fun. It could be the start of a trend!
Posted by Matt at 11/01/2005 10:17:00 PM

My brother and I were discussing the fact that there should be a halloween themed cycling event here at the end of October. Similar to the Great Pumpkin Chase.

If you want to feel less nervous but not ruin the spooky effect, maybe you should utilize a Down Low Glow, or something like it, next year. Actually, I even have one you could borrow since, while I love your idea, my kids are too young yet to set them off on their own so I won't be copying you for a few years yet. :)

Hey bro! Love the Hallowe'en antics...both yours and Henry's. I think more adults should dress up and play for this holiday--it's not just for barhoppers.

Thanks for the entertainment! As you know, Ann and I didn't really observe Hallowe'en this year...testing and treatment week. Ah well, there's next year.