The New York Times ran an article June 18 entitled The In Car Camera Never Blinks, But Viewers Might. These are the opening paragraphs:

The screams and gasps were just what one might expect from an audience watching a horror movie, but the scenes on the screen were slices of everyday life: real-world traffic accidents in progress, seen in footage recorded inside the ill-fated cars as part of a study of driver attention patterns.

Playing on a digital screen, and eliciting alarm from a crowd of experts here for a conference on auto telematics, were some of the 82 crashes — and almost 10 times as many near misses — recorded during a yearlong research project by the Virginia Tech Transportation Institute in Blacksburg, Va. The goal of the study was to collect the kind of information that does not usually turn up in accident reports, insurance claims or other types of after-the-fact data gathering. It found that driver inattention was the overwhelming cause of the crashes in the study.

The study, in brief, place multiple cameras and recording devices in 100 cars in northern Virginia for 13 months and recorded every last mile they drove. That's 100 cars, 13 months, 42,300 hours of driving, 241 drivers, nearly 2,000,000 miles. During that time, the following data set was generated (according to the Virginia Tech Transportation Institute press release):

I work for an insurance company, and this is a startling set of numbers. You take 100 cars and in 13 months get over 9,100 "incidents"? Ninety-one per car? Seven a month? I think how often I have a driving experience that causes my adrenalin to flow. Hardly ever. I look at our hundreds of thousands of cars insured and wonder about all the near-misses going on out there.

The main cause of all this? Inattention. Back to the Times article:

In some cases, drivers who had ample warning to take evasive and preventive action failed to do so because they were distracted or drowsy. Analysis of the data found that in nearly 80 percent of actual crashes and 65 percent of near crashes, the driver was inattentive in some way within three seconds beforehand. In rear-end collisions, the drivers were distracted 93 percent of the time.

The study found that drivers were overconfident or very poor at predicting when it was safe to look away from the road to perform another task. Driving situations can change abruptly, but many drivers seem to be lured into thinking the world outside the moving car can be put on hold while they pay attention to other things.

Care to guess what were the worst diversions? You, in the back, did you say cellphones?

One of the distracting activities noted most often was what Dr. Hankey called a "complex multistep, multiglance secondary task," like pushing buttons on a cellphone or similar device. More than 22 percent of the crashes and near crashes involved that kind of distraction. Young drivers in the study were far more likely to be distracted by such tasks.

This might sound familiar. Read Atlanta By Bike's experience just a couple of days before this article came out.

So why do I run this in a bike blog? 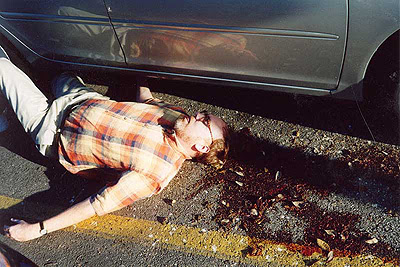 We're sharing the road with these folks, who I've referred to as Buffalo before, big, fast, heavy, ubiquitous, usually somewhere between cheerfully oblivious and actively stupid and therefore dangerous even without malicious intent. That last bit about young people being particularly susceptible to distraction rings true; recall that the person next to me at work had her 16-year-old daughter total the family Camry into one of our parking lot lightpoles last summer, and that our beloved Avalon has twice been clobbered in perfect conditions by 20-year-old females. Teenagers really really hate to be told by boring old middle-aged people that they're shitty drivers, but they are, and we've got forty years of loss experience to prove it. Maybe what this study shows is that they're not so much shitty as they are shittier, that the whole population (and the study's drivers aged 18-73) pretty much suck.

Us cyclists need to be wary of these Buffalo. We can ride with lights and reflectors, wear bright clothing, stay to the right, use approved hand signals, floss daily and keep our shoes shined but all it takes is some twit with a cell phone and a 4,000 pound car a few seconds before there's a horrible incident and the obligatory follow-up to the cop as the ambulance carries away the remains, "I didn't even see him."

Be careful out there.

PS The photo? Yep, that's me! I should have worn a helmet! This picture might be more convincing if I'd taken my glasses off. Despite its initial drama, it is actually me lying carefully next to a Cherry Icee that my buddy Paul ran over when parking a rental Camry in San Antonio in 2003. I lay down and looked dead (see the tongue hanging out? I'm a regular Laurence Olivier!) and his wife Anne took the photo.

Too lazy to see for myself. Did the researchers note any gender differences? I have my own feelings on the issue of gender differences (especially in the context of younger drivers) and I wonder if there is any scientific basis. The vast majority of collissions I've witnessed, and the couple in which I was involved were the fault of women (as are the three anecdotes in your write-up). Usually young women. Of course, about 99% of aggressive and threatening driving I've seen is the fault of young and young-ish men.

7 a month per driver sounds about right to me - I've seen many instances of complete driver inattention, and in the last two weeks have been hit twice by cars. In both cases it was because the driver couldn't be bothered to wait and thought they could speed around me or in front of me. The latest case is going through insurance right now, which is dragging a bit... I'm curious about you mentioning being in the insurance business, do you know what the average time is for a resolution?

Regarding gender, and I have nothing scientific to back this up, I think males (particularly young ones) are more likely to crash in what I think of as "Hey, watch this!" incidents or through outright aggressive driving whereas females (particularly youngs ones like those who seem so fond of clobbering our Avalon) are more likely to crash through sheer airheadedness. The study (p.71) seems to back this up a bit: "Males were involved in more crashes and near-crashes than were the female drivers. However, it appears that the female drivers were involved in a higher percentage of inattention events than were the male drivers. This suggests that when females are involved in crashes and near-crashes, they are more likely to be inattention-related. Males, on the other hand, have a higher rate of crash and near-crash involvement but a slightly lower likelihood of inattention serving as a contributing factor."

As for Steve's comment, I don't deal much with claims but typically straightforward physical damage claims (bent fenders, whatnot) settle pretty quickly but bodily-injury claims (where you're hurt by the other driver) require more work. BI claims are where a lot of fraud takes place so companies are more careful on those. I don't know if Canada is different than the U.S. in that respect.

While looking for the gender breakdown, I noticed that four vehicles had no incidents at all. Two were because of low mileage due to driver defections (left study), one was through frequent mechanical malfunctions and one because of excellent driver performance. So, 1% of the drivers out there are superb! Keep that in mind when you hear that the majority of drivers think they're better than average.

It's one data point, it's an old one, but it's interesting to note that First Lady Laura Bush killed a guy by running a Stop sign and t-boning his Corvair. There were no cell phones in 1963, so it wasn't that. She did have a friend in the car, which can be a distraction. The driver of the other car, a classmate of Laura's, was thrown from the car and died of a broken neck. No charges were filed in the accident.

Thanks for the post -- sobering to be sure, to realilze what we're up against.

AND, glad you explained the photo!