I rode over to join some of the Three Speed Tour guys for a beer or three last night. It's only about 3 miles from work, and it wasn't particulary hot out, so I didn't change and just rode over in my work clothes, wool slacks and black dress shoes. Shoes being bulky, I just left my cycling shoes at the office, figuring, I'll just get 'em when I ride in tomorrow.

What I didn't consider is how completely dorky this would look this morning. I got ready to leave and realized, well, I guess I'll wear these dress shoes in. I'd hate to wear white socks, my usual, with them, so instead put on my pair of freebie black cycling ankle socks that say "Burn It Up" on them and have little flames around the anklet. Thankfully, the Burn It Up is concealed by your shoes; my socks ought to say, "Hey Guys, Wait Up!". On go the cap-toe Dresssports, the shoes I normally leave in my drawer at work. With the electric blue Ralph Lauren shorts ($4 on clearance at the end of last season, Marshall Fields having failed to cajole anyone into paying $48 for a garment so hideous) and yellow t-shirt, I looked like a total doofus. My wife had a chuckle as I left for work, calling out "Have a good day, PeeWee" and I'm not sure but I think even the cat averted her eyes. Fortunately the children were still asleep and didn't have to witness this spectacle. 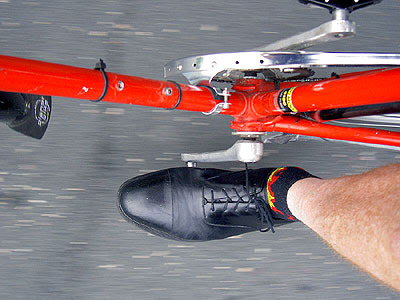 Here's the look. Worth a thousand words, eh? This is on the red Schwinn which is mostly done evolving. Besides the nice shoes, flaming socks and pasty while ankles, you can see the Wald chain guard I put on, replacing the stock nuts and bolts with 4mm stainless allen bolts, the zip ties holding the Nexus eight-speed shift cable, the stowed Esge/Pletscher two-legged kickstand under the left chainstay and the water bottle eyelets, one of which I successfully cross-threaded last week. I bought a 5mm tap to fix this, haven't yet done it, but I'll soon have a bottle cage back on there, and the Blackburn accessory mount, so I can carry the Mammoth pump and also sometimes an old Nightstick battery which I have plans for using as a power source for launching model rockets off the rear rack, sort of a human-powered mobile Scud launcher. My son is 14 and wants to launch rockets, a bicycle would be perfect, you can go right to the spot in the middle of big grassy areas, deploy the two-legged kickstand, thus maintaining a level platform, and launch away. I actually used to do this as a youth myself and amazingly still have the two-piece launch rod that is bike-portable. That project, once done, will be for another post.

Fortunately, I don't think I saw anyone I know on the way to work and went directly to the bathroom to change. Here I discovered that I'd forgotten to pack dress socks, so emerged in shirt, tie, wool slacks, black cap-toe Dressports (now looking very appropriate) and little flaming socks.

Fortunately, I have some regular black socks in my shoe drawer and discreetly changed over to them once I got to my office.

Some other items of interest. 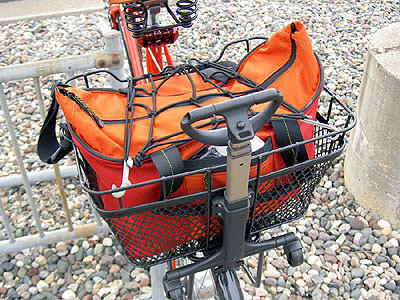 Here is how I carry my stuff on my commute. Rather than panniers, I use the roomy Timbuk2 Medium Cargo Tote to carry my clothing, raingear, office things (PDA, keyboard, cell phone, camera, etc), little tool kit etc. To carry this, I toss it in a Topeak Rear Basket that attaches and detaches very quickly from the rear rack by way of a thing Topeak calls a Fixer 6. I leave the basket on, but if you want it will slide right off and that handle extends and the little wheels allow you to wheel it around behind you, something I've never done, something which when combined with the socks/shoes/shorts combo could lead to unbearable levels of doofiness. I use a bungee net to hold down the Cargo Tote and lock. Nothing ever bounces out, the Cargo Tote is very comfortable to carry over my shoulder, and I can pack the clothes loosely enough that they don't wrinkly. People are sometimes surprised to find out that I, wearing pressed dress shirt, tie, wool dress slacks and the (almost) always-appropriate black Dressports, rode my bike in. I figure it quietly helps break down a couple of the regular objections to bike commuting, the "I have to dress up at work" one and "the I can't stink" one.

The basket works well for other stuff, too. I've carried beer back there, an Igloo cooler, groceries. The Topeak system is pretty slick but brings up a gripe of mine; the non-interchangeability of bike luggage. For instance, in our fleet of bikes we have a German front basket (on Karla's bike), a Jandd front bag (on Geneva's), the Nashbar Toto basket (not in service at the moment) and an Ortlieb front bag (on my bikes), all of which require their own specific mounting hardware on the handlebars, none of which is compatible with the others. To some extent, this is understandable in that they are all from different manufacturers, but Topeak, who has a lot of well-conceived products, for some idiotic reason has three different rear rack track mount formats. Why oh why would you do this? In my case, the Topeak Super Tourist rear rack is the MTX format. Mounted to the bottom of the basket is the Fixer 6, a plastic shoe that slides into the rack track, and a yellow catch that catches the cross-bar at the front of the rack. It's securely mounted yet can come off in 5 seconds and go back on as quickly. The shoe raises the basket enough that it'll clear pannier hooks on the rack's side rails, so that if I'm buying a lot of beer I can mount 2 grocery panniers plus the rack-top basket (and then almost do wheelies all the way home). It's ever so practical, but I wonder why they sabotage their own idea with the three track mounting formats.

They aren't the only baskets around. I added a link a couple of weeks ago to a Dutch company called Basil that makes bicycle luggage. I'd seen a couple of these on the Saint John's Street Cycles website some time ago and one day tracked down the maker. Then just this weekend the Saint Paul Pioneer Press ran an article about cycling in Holland (originally from the LA Times) that started:

A bicycle bell tinkled and I looked up and saw a Dutchman in a knit cap coming toward me. As he pedaled by, a fuzzy white head popped up from his bike basket. It was a terrier, chin up, ears perked forward, head tilted curiously to one side. Easy-riding Rover, I thought. The dog was probably enjoying the moment as much as I was.

Its master and I were bicycling through the countryside about 25 miles southwest of Am sterdam, watching Holland's famous flower fields flash by. The terrain was flat, the air crisp and clear, the scenery a splash of dazzling yellow and green. Acres of bright daffodils stretched in every direction. I felt as though I had found bicycle nirvana.

Perhaps I had. With 13 million bicycles, the Netherlands — or Holland, its regional name — has twice as many bikes as cars and nearly as many bicycles as people. An 11,000-mile system of bike paths, many of which are separate from highways, crisscrosses a nation so small and flat that it's easy to use bicycles to transport people, groceries, even terriers.

Accompanying the article was a photo of a bike with either a Basil or Basil-like pet basket on it. It's worth looking at their site; they make lovely wire and wicker baskets and the pet carriers look particularly useful as they have a wire cage thing to go over the top and apparently mount to the seat tube rather than directly to the rear rack so (I think) the pooch or kitty doesn't get shaken to pieces. Not that I'd take Sophie the cat anywhere, but it's still cool. I emailed Basil to see if they sold here in the U.S., but not yet, apparently. I also emailed Jim at Hiawatha Cyclery encouraging him to tie up all his working capital in a container-load of these things so that maybe I could buy one if I felt like it. Sadly, he may be learning after his Bleriot enthusiasm.

Finally, also from the Dutch, a nifty bicycle maker. Take a look at De Fietsfabriek. There's lots of heavy utility bikes ("Perfect for families with two or three children") like the Dutch ride, cargo bikes, but also a whimsical High Bike. The best thing about this unit is the tongue-in-cheek suggestion that if you have to stop quickly in traffic, just put your foot on top of a car! You won't find that kind of advice on your Trek site!
Posted by Matt at 7/11/2006 09:59:00 PM

I wear cycling socks almost exclusively. A couple people know me for my strange socks. I sat next to my VP in a meeting once. I was wearing a pair of 24 Hours of Afton socks which feature a skull...and I had my ankle crossed over my knee. The VP interrupted the meeting to ask me why I have skulls on my socks. Ermmm...

Hey, I'll have you know that I have managed to sell 1/8 of my Bleriot inventory. In fact, at the moment it is my hottest selling 650B bicycle! Now, with my confidence in my ability to gauge the consumer restored, I am almost ready to bet my daughter's future education on these Basil products, and $50 kickstands.

Oh yeah, and sorry about leading that one character to come to your site and call you names.

Check out my commuting blog at
http://tucorides.blogspot.com

if you get a chance! Be well!!

Those shoes certainly set the mood:-)

Where did you get the chainguard? I've been looking for an aftermarket chainguard for a couple of bikes I have.

The chainguard is a Wald steel chainguard that I got at a local bike shop for $6. It is one of the trickier parts to install--the clearances are very tight and require fine adjustments. I have since had this chainguard de-chromed ($45) and painted along with the rest of the bike and a set of plain Honjo aluminum fenders. It all looks very spectacular now.