I took today off to volunteer at the Great River Energy Bike Festival which kicks off with the Nature Valley Grand Prix, a set of five bike races. I was scheduled to work 12:30 to 3:00, my biking buddy Paul from 5:00 to 9:00.

It was cloudy and humid out, after-effects of a storm front which moved through at 4:00 in the morning overnight. We decided to go down and watch the Pro Racing, which started at 11:00, and spent a bit of time fiddling with bikes. Paul rode my wife's Trek 700, an unfashionable and fairly old women's-framed bike with fenders, rack, bell and a front basket. He did switch his clipless pedals to the bike.

Off we rode. We got downtown a little after 11:00. We were up on the high bits above the river and so stopped on the Wabasha Street bridge, where I took this photo: 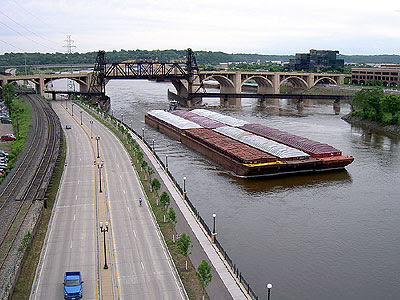 I like this photo, the cyclist looks so insignificant in comparison to the size of the barge tow going upriver, the train tracks, cars, etc. A lot of transportation stuff comes together in downtown Saint Paul, there's even an airport in the distance.

The Time Trial race is a timed race. Each racer gets sent off by themselves and their run is timed. This one was nearly five miles, out and back on this road along the river. Here one of the women racers is in the start box. My buddy Paul later noted that the very serious-looking official on the right had great legs. I hadn't noticed at the time. 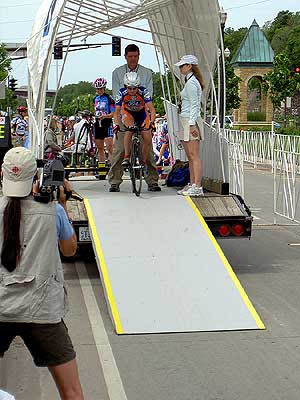 The timer counts down, the girl with the nice legs shows three, then two, then one finger, and off the racer goes. They went tearing off east along the river and under the old railway bridge. Here a cyclist goes under as a coal train rumbles overhead. 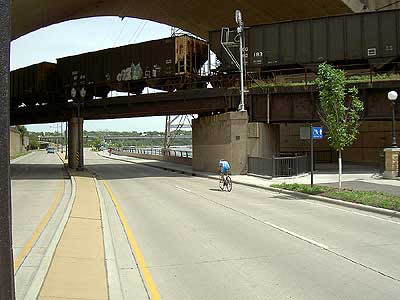 The river is flowing east at this point, but then turns southwards again. The road follows it and that's where the time trial went. There was a motorcycle camera crew covering some of the racers; I don't know enough about racing to know who is good and who is peloton fodder, but apparently this guy merited interest. 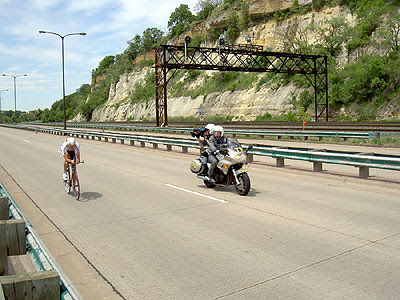 The cyclists had to turn around an orange traffic cone thing at the far end of the course, then race back to the finish line, right by where they started. Here a cyclist approaches the turnaround. 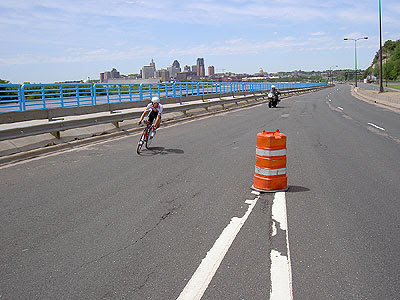 The racers are timed on this so they are racing against the clock. Still, they are sent off every thirty seconds and it is possible for a fast cyclist to overtake the one sent out ahead of them. I don't know if this photo shows an overtake that just happened or one that is about to happen, but one of these guys is going to be bummed out. I suggested to my buddy Paul that if you were really fast it would be kind of demoralizing to have a little brass bell on your handlebars like my wife does (and I do) and give slower riders a friendly little "ding ding" as you kicked their ass. 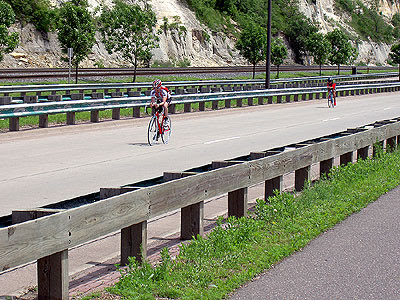 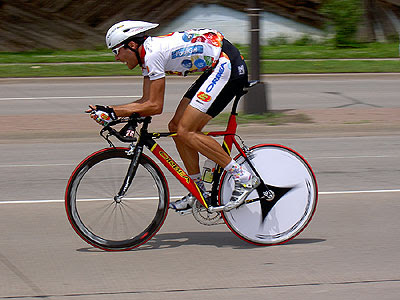 I didn't actually take any photos at the finish line.

The event was slightly odd, different from the Minneapolis Criteriums I've volunteered at in the past. This was due to this being the middle of the day on a weekday and also from the lack of pedestrian traffic down along the river. Most of downtown Saint Paul is up the hill, and I don't think there were many office workers who just wondered down over lunch. The Minneapolis Criterium, held on a Friday evening, is a different kettle of fish, tons of people, lots of traffic, and a jolly crowd in the after-work, had-a-couple mode.

Bike Racing is not very Practical, but it is kind of fun. We seemed to be the only volunteers who showed up on bikes and they were perfect, allowing us to range up and down the whole course (hence all these photos) at will, checking on stuff and delivering water to volunteers. There were more volunteers during the early afternoon shift than were really needed to cover the limited pedestrian crossings, so our roles were pretty ill-defined. Once the race was over, Paul and I hung around and helped tear down the tents, etc. We ate a tasty dinner 4:30-ish at the Eagle Street Bar and Grill (again, the bikes made getting there very easy while traffic was all jammed up and it would be a bit of a walk), then Paul went back to work the 5-9 shift while I went home and on to choir rehearsal. We all finally pulled in just after 9:00, pooped. Time for a good night's sleep.
Posted by Matt at 6/08/2005 11:16:00 PM