Why I Was Late for Mass

Another Twin Cities bike blogger (Daily Spirit-Human) wrote about doing a Critical Mass ride in Saint Paul in his blog in May. He thought about calling it Non-Critical Mass, as it wasn't going to plug intersections or annoy people, just ride around downtown. I've never done a Critical Mass, so can't speak from firsthand experience, but I'm not sure that annoying motorists is a great way to win friends and influence people. On the other hand, riding visibly around downtown being assertively polite didn't sound too bad. I think he ought to call it Sub-Critical Mass. I thought I'd give it a try.

Anyway, we were supposed to meet at 4:45 and ride off at 5:00. I got back from work and got stalled. Karla and I were talking about Dr. Breedlove's death and Geneva, who had gone to ValleyFair yesterday with the church Youth Group and got back after I'd gone to bed, had to tell me about surviving the Steel Venom ride. I finally set off.

Delays mounted. Here's the bike at the Black Bear Crossing on Como Avenue: 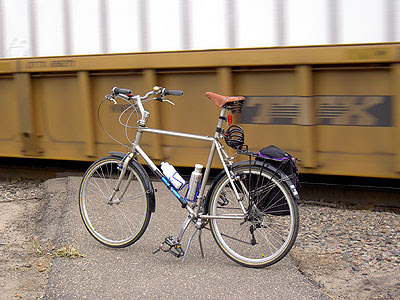 Note the utility of the kickstand!

I got downtown about 5:15. No Mass in sight. Oh well. I coasted down towards the Robert Street bridge. It's a nice view of the river. There are parts of the Twin Cities that look a bit like a model railroad set, and this lift bridge over the Mississippi is one of those bits. 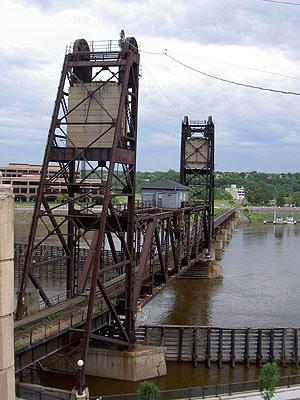 Riding onto the Robert Street bridge you get a good view of the operator's hut on top of this bridge. 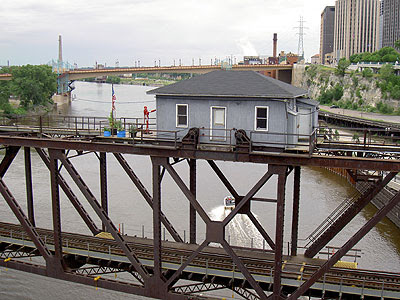 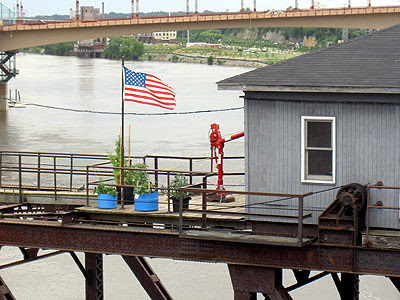 This bridge is usually parked in the up position so that barge traffic and the more majestic yachts can get by. I wondered if it were down for a reason, and rode across the bridge to the south side of the river. There's a lovely walking and cycling path along the river. It even gets an official rail crossing. As soon as I got there, a train appeared and crawled by. I think the speed limit on the bridge is 5 miles per hour. Here the Soo Line locomotive crosses the pedestrian pathway. 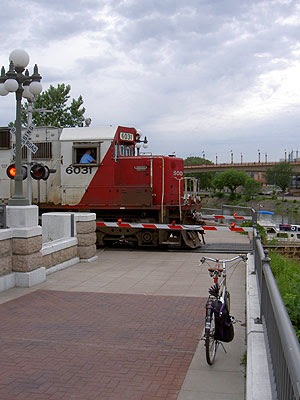 It chugged across the river. On a bike, it is remarkably simple to hop aboard and quickly move a couple of hundred yards for the next shot where it would be tough to run over quickly enough for the next shot on foot. 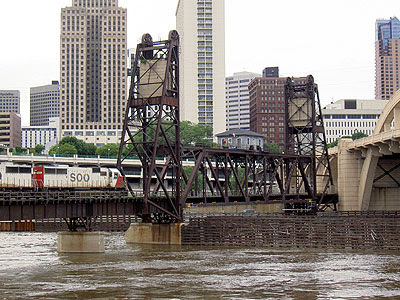 The train looked long and I couldn't get past it on the pedestrian path until it got past, so I rode back over on the Robert Street bridge. I rode around downtown a bit but saw no packs of cyclists. I rode up to the Sibley Bike Depot to see if they'd gone there, but it was closed. Then I rode home.

Going up Como Avenue I'd just crossed at Black Bear Crossing again when I heard yet another train. I stopped to take a picture. Here a CSX train comes chugging past. At this point the westbound trains, like this one, are lugging uphill, so they're not going that fast. This is one of the few level crossings of the mainline tracks. 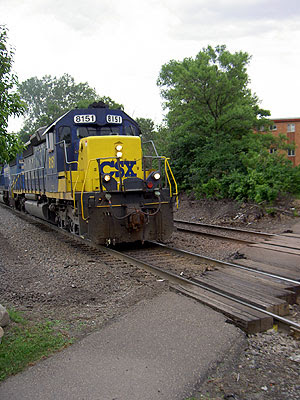 About six years ago a child was killed at this crossing. He and his twin sister tried to beat a train over on their bicycles. The young girl made it, the little boy almost made it. The train clipped his back wheel which threw him to the ground pretty hard. I don't remember the details any more, but the injuries killed him. These kids were about the age of mine, and ours crossed this everyday going to school (in a school bus) so it made a real impression on them.