Saturday morning I decided to move the Atlantis another step towards practicality by installing my Esge fenders. This took a while. One of the features of the Atlantis is that it has clearance for big tires and fenders. I installed pretty compact 28mm tires (the Rivendell Roly Polys) and as a result have oodles of clearance. In fact, when I held the fenders up, they looked a bit daft. So, I used little aluminum spacers (3/4" and 1") to move the fender closer to the tire at the chainstay and seatstay mounts. I also drilled a hole through the fender to screw it directly into the bridge on the seatstays. This all took a while.

Meanwhile, other duties called. A huge branch of one of our silver maples had come down and I had to cut it up and haul the branches to the Ramsey County Compost site. I took the first load down, then went to the Sibley Bike Depot. These guys take in old bikes and fix them up and resell them. I had been in there when my friend Paul was up for the Great River Energy Bike Festival and they had had a couple of enormous Schwinn World Sports in the collection. I'd expressed an interest in the red one and last week had a call that I could buy it "as-is" if I signed a release saying I wouldn't sue them.

So I went in and got the bike. Frames this size are very rare in my experience. I can count on one hand the number of times I've run into 27" (68cm) frames in stores, and bought the Atlantis frame in that size in part because Rivendell is one of the few makers building stock frames that big. Given this, it was extremely odd to find two in the Bike Depot. I signed the papers, paid $125, and took away the bike, shown below: 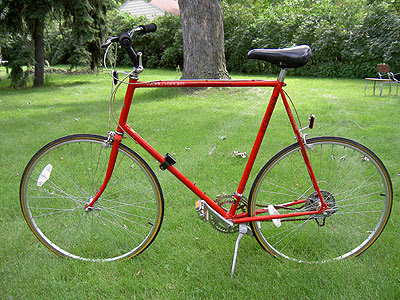 The frame is double-butted chro-moly lugged steel with forged dropouts. The Bike Depot guy seemed to be something of a connesiuer and said the frame was built by Bridgestone about the time Schwinn went broke. This particular one has a rusty chain and pedals, nondescript components and a potato-chip front wheel, but the frame is a tenth the cost of the Atlantis frame and I have designs on possibly getting an Xtracycle for it.

I stopped at the hobby store, too, and got some Testors red enamel. Time to mark the Atlantis as mine. Here's the bottom bracket: 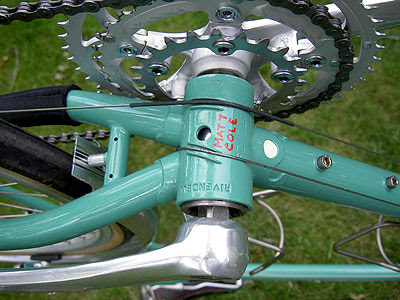 Lots of stuff to see here. You can see my name painted in, the Phil Wood bottom bracket inside the shell, the primitive cable routing around the bottom bracket shell and the 3/4" spacer on the chainstay fender mount. You can also see the third bottle cage mounting bolts and the fairly frivolous bit of paint job in the bottom bracket lug.

I'm not sure painting my name on the BB helps much, but if it's stolen, it's a quick ID to make and probably won't be noticed by any thief. I've done it on all my bikes. I had a Trek 750 hybrid stolen in 1995 and never heard another thing about it, so maybe it's wishful thinking, but it gives me comfort.

Sunday Geneva and I rode to church. Henry's still off on his Minnesota Boychoir Tour, so he'll have to try next week. We hadn't done this before. Karla started at St. Luke's Episcopal as Music Director in January. During Choir Season (think school year) we have to be there by 8:15AM and it's a solid 13 miles away, so we haven't ridden. School's out, choir's over and the church is on the 10:00AM Summer Schedule, so we don't have to be there until about 9:58 (well, Karla does, the rest of us can get in at the last second).

Geneva and I set out at 8:40 and arrived at, well, at about 9:58. It turns out to be 13.7 miles, down Como Ave past the State Fairgrounds (with a cheesy circus on right now), down Raymond and then Pelham to the Lake/Marshall bridge, across the river, down the West River Parkway to Minnehaha Parkway, then out the bike trail to Lyndale, where we got off onto surface streets to get to 46th and Colfax. I had to make an announcement about some painting we'll be doing and quickly ditched the bikes in the library and went straight into church, dripping wet with sweat. I took no photos on the way over due to the time constraints.

After Coffee Hour, for which I am now the Scheduler and coordinator, Geneva and I set off home. We hadn't got far when she got one of her shoelaces caught in her chainring and had to stop to extricate it. Here she is, having just done this: 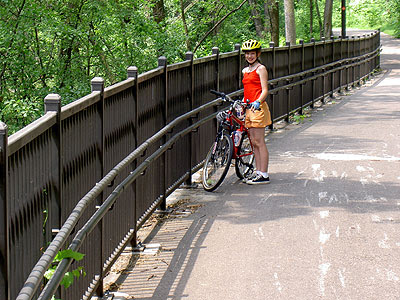 Minneapolis is as high-tax as Saint Paul. This buys you great public facilities like this bike and pedestrian path and also some public art, like this enormous bunny. Here are Geneva and I with this critter: 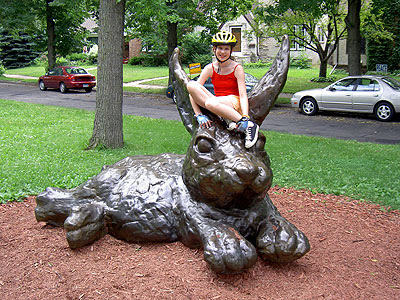 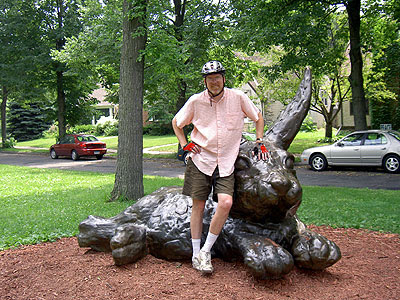 This is the first time I've ridden the Minnehaha bike path. When we moved here, eleven years ago, I made the observation that people had pretty limited spheres of operation. People seemed to have their work, school, church and mall and lived much of their day to day lives in this small orbit. The cities are so pretty that it seemed weird to me to meet people from, say, Minneapolis, who had only ever been to Saint Paul twice. Well, we kind of fell into the same pattern, and thus I went more than a decade riding around and never once rode from the falls to Lake Harriet, one of the signature trails in Minneapolis.

Anyway, we ate at a Dairy Queen by the park, then rode over to see the falls. Minnehaha Creek, along which the bike path we'd been riding flows, goes over these attractive falls shortly before the creek enters the Mississippi. 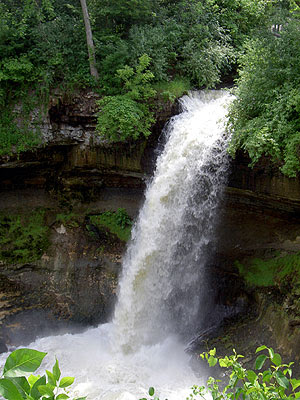 Rather than ride up the west side parkway again, we crossed on the 46th Street/Ford Parkway bridge. It's a quirk of this state that street names change when they go from one city to another, so all these streets change names when they go from Minneapolis to Saint Paul. On another level, counties all name their county roads independently from the adjacent counties, so the same road will suddenly change numbers at the county line. Paul had found this confusing when riding up from Iowa earlier in June. I hadn't noticed it before. Anyway, off the Ford Bridge (it's by the Ford plant, where they make Rangers) you get a good view of Lock and Dam Number 1. This is the first of 27 numbered locks, the last one at Alton, Illinois, just above the confluence of the Missouri and Mississippi Rivers near Saint Louis. This one also has the biggest single drop on the river, 60 feet from the upstream side to the downstream side. You can see a map of the "Stairway of Water" here. 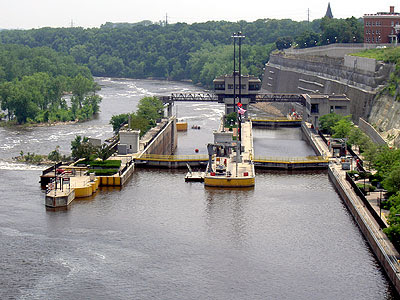 Gosh it was hot. Humid, too. We rode up the east side of the river. At the west end of Summit Avenue there is a drinking fountain. Here's Geneva drinking, with a memorial to residents of Saint Paul and Ramsey County killed in the World War, then a view upriver to the distant, hazy skyline of Minneapolis. This monument was erected in 1922, hence the lack of a reference to World War I; with the horrors of pointless trench warfare a fresh memory it must have seemed incomprehensible that in another 20 years we'd do it all again. 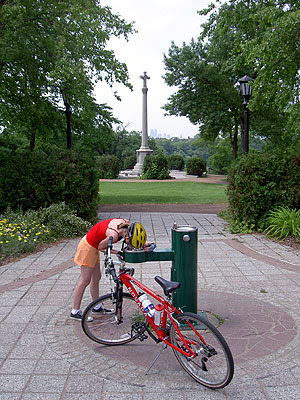 And then we rode home. We stopped at a bike shop (Boehm's) that had a silver Blackburn rack on clearance for $10, and I got excited about it, but it had fixed front stays and didn't fit the Atlantis. Oh well. When we got home we'd ridden 30.5 miles. Geneva is 11 (and three quarters, Daddy). She's so good. We don't move at Lance Armstrong-like speed, but she cracks off 30 miles and thinks it's a great way to spend the day. I never rode anywhere near that far when I was 11 (or eleven and three quarters).

Henry's back now, bubbling full of stories of his weeklong Boychoir Tour, and, weather permitting, we'll try this again next week.
Posted by Matt at 6/26/2005 10:36:00 PM

It's funny they call the lock and dam by Minnehaha Number 1... Because there are two more "above" it near downtown Mpls! :)

When I first wrote this, I misspoke. There are 29 Locks and Dams, but the US Army Corps of Engineers numbers them 1 to 27 plus there are the Upper and Lower Saint Anthony Falls one upstream from the one in the photo, which is Lock and Dam Number 1.

I know this is an old blog post, but I saw the picture of the cable routing under the BB shell on the Atlantis. My rear derailer cable is cutting into the paint, and I see that you have some kind of tape/covering on the cable as it passes under the shell. Could you tell me what that is, and how well it works?

That's a bit of heat-shrink tubing from Radio Shack heat-shrunk onto the cable. It doesn't work worth a damn, having wiggled its way down-cable over time. I too am slowly flossing my way through my bottom bracket shell but am not worrying about it. The Atlantis is my main bike outside of road-salting season so picks up its share of dings and scratches elsewhere and I don't worry about the BB shell any more.