As is often my custom, I took my bicycle to church Sunday to ride home after the early service, in which choir I sing, while my wife the Music Director stays on to play the late service. These are usually nice rides home without much in the way of time pressure and I can wander a bit.

I'd seen that today the construction guys working on the I-35W bridge over the Mississippi were going to lift into place a couple of big concrete segments using some enormous crane on a barge. This sounds fun! So I rode past the West Bank of the University of Minnesota and onto the 10th Avenue Bridge immediately adjacent to the I-35W bridge construction site. This makes a marvelous viewpoint, by the way, and is fabulously accessible by bicycle. Here's what I saw. 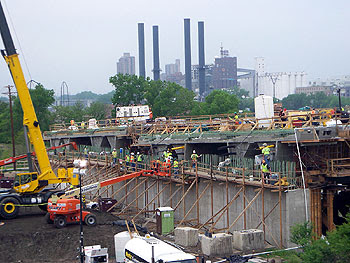 Jeez, fellas, I hate to be critical or anything, but it looks to me like these aren't level. This is the land side of the approach to the southern bank of the bridge. This would be by the Holiday Inn, for the locals. 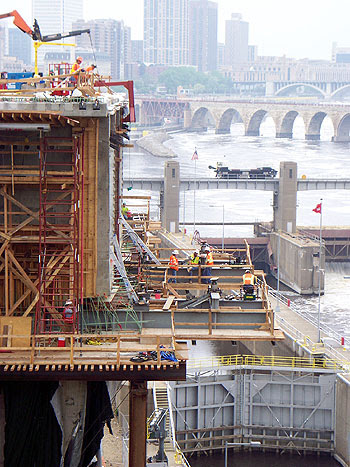 There were a bunch of workers here where the big concrete bridge deck segments were to be placed. I kind of wonder what individual workers do in a lift like this. A bunch were taking photographs. In the background you can see part of the Stone Arch Bridge, now used only for pedestrians and cyclists to get across the Mississippi. On the lower right you can see the downstream lock doors for the Upper Saint Anthony Lock. 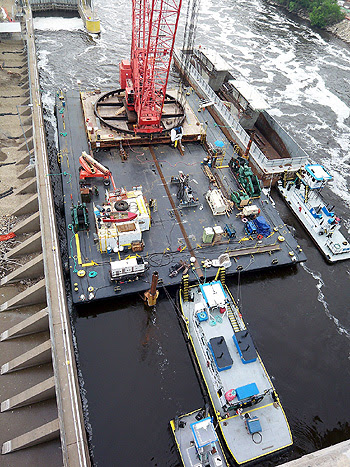 This is one major crane. It's two barges side by side and moored to the river bank against a pretty strong current. That's a towboat parked behind the two barges. Off to the right is another barge with the two bridge segments to be lifted with a towboat that had moved them into position. These things are cast in the Bohemian Flats area about half a mile downstream. This used to be a neighborhood full of (you guessed it) Bohemians but it was prone to flooding and they were moved out in the 1960s. It's normally open parkland now, but has proven darn handy in the event a major bridge falls down a few hundred yards upstream. They moved a lot of the steel beams there to figure out what had happened, and now are casting these concrete segments there. The little tiny tow nestled in at the bottom of the photo seems to be a water taxi...at one point, it chugged across the river with somebody, then came back. I suppose getting from one side to the other would be a real pain otherwise. 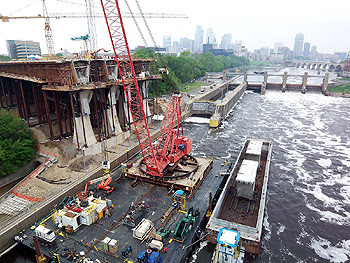 The overall lift scene. You can see downtown Minneapolis in the background and the Upper Saint Anthony Lock and Dam in the middle distance. The river has some real current to it at the moment. 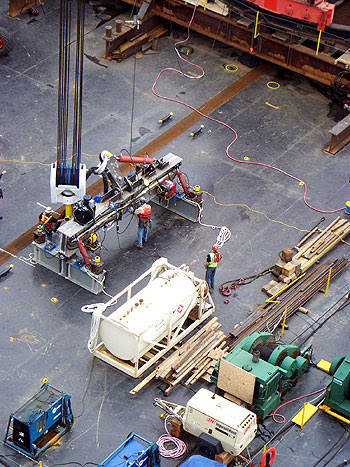 The crane was going to lift this thing, which the workers are fiddling with. Each bridge section had four long rods sticking out of it; near as I could tell, those would go through the four yellow holes in this puppy and be secured somehow, then lifted into position. The pulley on this crane has lots of mechanical advantage and they have to pull oodles of cable to get it move anywhere.

Unfortunately, there was lots of standing around activity going on and I had tickets to The Triangle Factory Fire Project ("a whimsical lighthearted romp!") at the Hillcrest Center Theatre at 2:00, so at 12:30, just as some actual activity was stirring on the deck, so I took my reluctant departure and rode on home and didn't see the actual lift.

The play was excellent, by the way, but today's performance was the final one. This was opening day for bridge segment lifting, and there are 120 sections to be done, so you still have plenty of time to see more.
Posted by Matt at 5/25/2008 09:28:00 PM

Great shots -- we head over every now and again to see how things are progressing.

cool photos...it's come along a bit since I last biked by.