The 2008 episode of the Lake Pepin Three Speed Tour was this past weekend. As always, Jon and Noel organized a wonderful event. We gathered in Red Wing, rode to Wabasha Saturday with some tailwinds and a spot of rain to make in an official Three Speed Tour, had the usual bash at the Eagle's Nest Coffee Shop Saturday night, then gathered to ride back Sunday. It was cooler Sunday, sunny, but we had stiff headwinds. Fortunately, these were often screened along the river but the group that took the highlands route out of Wabasha suffered for their decision though I gather there were terrific views. There was a Brew Up in Lake City, the usual social gathering in Old Frontenac, the excitement of the Hill Avenue climb and descent for many of us, then the slog into Red Wing into the teeth of the wind and the post-ride gathering at the Staghead. This was of course all done on three-speed bicycles whilst dressed in proper ladies-and-gentlemen fashion. In my case, I again went as the Quicker Vicar, seen here at the Lake Pepin sign on the Wisconsin side. 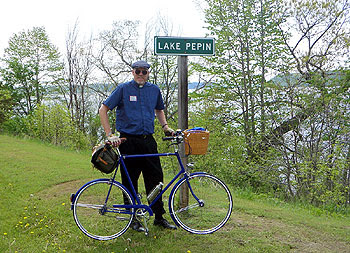 Last year I took the easy way out, sticking to Highway 35 south of Maiden Rock rather than taking the County AA/E climb to the top of the bluffs. This year, I climbed. Actually, I walked a bit of it, but it turns out that not much easier on the legs than riding. Once atop Maiden Rock, which had been ridden to by a tandem pulling a trailer and many riders including several young ladies in skirts and heels, we fell about to bask in the view and the sunlight. 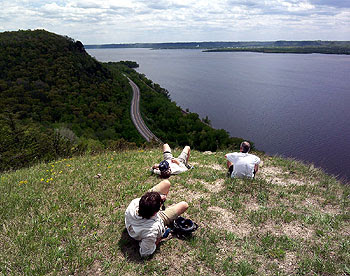 That's Wisconsin Highway 35, the lowlands route, down below. The ride across the dandelion meadow is just about the only off-road riding I do all year. The reward is great, since two years ago I'd done the Death March selection for the loop and bypassed this outcrop by accident. It's worth going out to.

I'll write more, but it'll be a few days. Got a busy week coming up. To all who rode the Tour, thanks for a great event, it's terrific how our little bit of alternate reality for two days creates such a high and it's a priviledge to ride with you. It makes a great kickoff to the summer cycling season.
Posted by Matt at 5/19/2008 07:27:00 AM

Just exactly how tall are you?

The head tube on your bike looks longer than my top tube:-)

Thanks, I took more but my digital ran out of battery power midday Sunday and I had to revert to my Rolleicord and black and white film. Might be quite charming once I get around to developing it.

I'm 6'5" tall and that's a 68cm (27 inch) frame. I had it powdercoated last year along with the smooth Honjo fenders and Wald chainguard and am very pleased with the look. I even got a perfect match on the brake cable housings through blind dumb luck, so it looks like I meant it. The only real change this year was the headlight. I have a Shimano generator hub on the bike and had the Shimano light; I switched the Busch + Muller Lumotec Retro which you can see mounted on the fork crown (click on the photo to get a larger version). It works great and looks superb.

My second year in a row of missing the Maiden Rock outlook. Last year, there were confusing directions in the tour book, and this year we did some improvisational pass-storming that detoured us around that point.

I'm looking forward to your full tour report. Good to see you this year!

The tour was delightful! I'm glad to have met you, and I'm looking forward to seeing how the Rolleicord's pictures turned out. ~ Nancy