Teach You To Commute I Will

I'm teaching a class on Commuting by Bicycle on Thursday. This is being done on behalf of the Midway TMO (actually, it merged with the Saint Paul TMO and became Smart Trips). It was to be publicized in a mailing but the mailing hasn't gone out yet. I guess they've been flogging it at some events, but there's no signup required so there's no idea how many people will show. Fifteen, they guess, I'm printing 25 copies of my handout, and this is one of those events that could end up with 3 people or 175.

In the event you feel the need for advice from a dilettante commuter such as myself, it will be Thursday May 22 from 6:00PM to 8:00PM at Dayton Avenue Presbyterian Church at 217 Mackubin Street in Saint Paul. Maybe only two civilians will show up and we can impress them with the beauty and efficiency of bicycle commuting by having a bitter and recrimination-filled argument about clipless pedals.

I did commute today, what a hero, Me commuting isn't that notable except today I went to Home Depot after work. We're in the midst of a slowly-evolving kitchen renovation and this was the day to talk Cabinets. This isn't all that fascinating, either, but I rode the new bike trail that parallels Saint Anthony Boulevard. This was a disused train line, and in fact where the trail starts off Walnut just south of County C, there is a sign saying that this right of way is reserved for commuter rail use. The implication; the bike path is temporary, and don't whine you cyclists when we take it back. For the moment, and at the rate those projects move, for many years to come, it makes an excellent alternative to ridng on Saint Anthony Boulevard itself, which is four-lane divided and likely to be regarded as almost Interstate-like by motorists.

To get to the trail, I rode down Cleveland and took County C west. County C west of Cleveland pretty much blows. East of Cleveland there's a superb bike path south of the road AND a four- or five-foot shoulder for those who disdain sidepaths. West of Cleveland there's hardly any shoulder beyond the two travel lanes each way and it's concrete with lots of cracks and potholes indifferently filled in with asphalt. At least there's plenty of truck traffic and impatient motorists. Since it's outside of Saint Paul, it's not under the purview of the Saint Paul Bicycle Advisory Board and I don't know of any plans for the lousy bit of County C, but if they rebuild it to the standards of the road east of Cleveland it would be an excellent route towards downtown.

Although this isn't exactly unexplored territory for me (although I hadn't been on the trail, which opened last fall), I did consult my excellent Twin Cities Bike Map, 9th edition (that's the brand new edition, just out). Little Transport Press has become Bike Everywhere which I think is just a new name. I really like this map and am constantly surprised by the number of cyclists who don't have it. I'll be urging it on those who attend my Commuting Class because I have found it very trustworthy over the years. The price went up to $11.95 from $9.95 but it's printed on some kind of waxy paper that is supposedly water resistant, which is good because my older ones have gotten pretty worn being carried around. You should get one of these maps.

I did like this bit from the new edition: 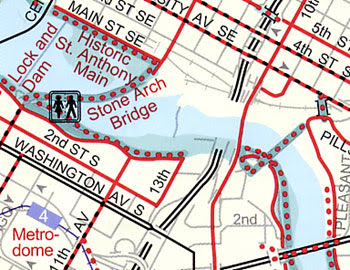 The I-35W bridge over the Mississippi is missing on the map. He'll have to put it back in, of course, but it won't affect cyclists other than to reopen the bike path on the east bank.

Speaking of bridges, I got an email noting that in the flurry of self-congratulatory bill passing at the last minute by our government (our Governor Tim Pawlenty seemed more agreeable than usual, perhaps hoping that next year he'll be Vice President) was a couple of million bucks to remove and rebuild the Cedar Avenue Bridge over the Minnesota River in Bloomington. This will be for cyclists and pedestrians only and is a useful connector across the river. Doug will have to update the map again; right now, his says "Bridge Out" at that spot. He also still shows the Lowry Avenue bridge open; it had a pier move 11 inches and our suddenly bridge-sensitive government closed it down (the same happened to a bridge in Saint Cloud, and the Hastings Highway 61 bridge is down to 1 lane due to buckling gusset plates...sheesh, you have one Interstate Bridge drop off the map and all of a sudden people give a damn about our crumbling infrastructure). It's getting hard for a cartographer to keep up with the bridge status in this state.
Posted by Matt at 5/19/2008 10:38:00 PM

I ride that trail to work sometimes. It's very nice except for the portion along Stinson Blvd. That's a glorified sidewalk. It has too many blind intersections where the car drivers don't have a clue. The 35W underpass is the worst place. I chose the road instead of that trail. I get on the trail from Honeywell north.

Hi. Please join the Bicycle to Work! LinkedIn networking group. Members pledge that they will try to ride their bicycle to work or on an errand at least once a week. Although the benefits should be obvious, let me outline them here.

Right now people in the industrialized world are facing two very grave problems: obesity and a growing scarcity of oil. Compounding this problem is the new food shortage brought about, in part, by the conversion of food cropland to bio-fuel crop production. Most people feel powerless to help, but there is one thing that we can do. Ride our bicycles to work.

If everyone would agree to ride their bikes to work one day per week we could cut oil consumption by as much as 10-15%. No one would argue that riding a bike burns more calories than driving the car. Although popular politically right now, most bio-fuels consume more energy than they produce. We would be much better to eat those bio-crops then use our own energy to transport us around.

So spread the word. Make it a movement! Bicycle to work one day a week and do your part to cut back obesity and the overuse of oil and precious cropland.

Just go to my profile at http://www.linkedin.com/in/jeffreylstevenson and you can click on the group to be included. While you are there, don't forget to ask to link to my network of more than 9,000,000 like-minded professionals. I accept all invitations and look forward to meeting you.

Matt,
You might want to let your experienced bike commuters know that the Bike2Benefits program offered by the Met Council needs more route mappers.

This is a paid contract position ($18 per hour) and you get to choose how many routes you want to map. It is open to anyone with bike commuting experience and an ability to figure out bikeable routes through the metro area. For more information, contact John Sigveland.

This is a valuable aid to new bike commuters and a way to earn a little extra money on the side.

Also, thanks for mentioning the Twin Cities Bike Map.

being that you're a dedicated Twin Cities cyclist, thought you might enjoy these posters my daughter and I recently created.

Hope you enjoy them!