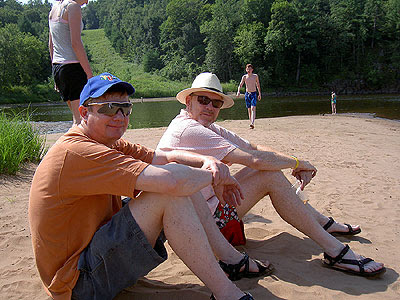 Grizzled Veterans of the 1970s Bike Boom, anyway. My friends Mark and Teresa were up for the weekend. Of all my cycling buddies, Mark was the earliest. That's him on the left, me on the right. He got in early, in high school in the early 1970s, when his paper-route money made him comparatively a rich man. He had one of the three Raleigh Professionals, all Reynolds 531 and Campy, in the state of Iowa when European bike supplies dried up due to President Nixon's wage and price controls; one of the others was owned by John Karras, one of the founders of the Register's Annual Great Bike Ride Across Iowa (RAGBRAI); fittingly, Mark was one of about 120 people to ride the entire first RAGBRAI; for all the current fuss about fixed-gear bikes, he had a fixed-gear brakeless track bike before we were out of high school and once rode it to Booneville, our regular 28-mile loop; he and my other main biking buddy Paul rode a tandem from Des Moines to Boston in 1980; Mark rode the BAM (Bike Across Missouri, 24 hours from Saint Louis to Kansas City) in the early 1990s; in recent years, he was a riding partner with Bob Breedlove, a high-achieving distance cyclist killed in June when he was hit by a truck in Colorado while competing in the Ride Across America (RAAM). Mark was on his way to work support for Breedlove farther east when the accident occurred. And when I say Mark was a riding partner, Breedlove had a custom carbon tandem built sized for Breedlove in front and Mark in back; this weighed in right at 30 pounds, about the same as my Atlantis with fenders, rack, kickstand, etc., and Mark related how they'd go riding with racers 10-15 years younger than they were, keep with them up the hills then, as he put it, put a hurtin' on them on the flats. The idea was to ride Paris-Brest-Paris on this bike, but they missed the last one.

Mark was always a strong rider. He was a competitive swimmer in high school and, while I think it's fair to say he was just an ok swimmer, the several-thousand yards a day they trained would deliver him in early spring in terrific physical shape, unlike me.

So two old biking buddies get together and what do they do? Go canoeing! In the photo above, we are sitting on a sandbar in the Saint Croix river late last Sunday morning while some of our offspring frolic in the background. We did the Taylors Falls to Osceola stretch and it turned out to be a lot of work; while the current was with us, the wind was strong from the south and we had to paddle hard against it. At one point we had stopped paddling and stowed paddles so I could take some photos, and our canoe (me and my daughter Geneva) blew upstream and lodged against some submerged rocks. The only cycling was Mark's quick loop around our driveway on my Atlantis, which he could just barely straddle.

Had we been real men, we would have done what these people are doing: Tow Their Canoe with a Bike (Thanks to cleverchimp for noticing this item). But we drove up, seven of us in their minivan, and caught the schoolbus back upstream when we were done.

It's funny how we all evolved differently. Four of us (me, these two, and another guy named Bob) used to regularly ride to Booneville through the late 1970s as a training ride, though what we were training for remains unclear as I for one never raced. Mark became almost a pure distance cyclist; once I was at their house on a Saturday at lunchtime and he rolled in off a 150-mile training ride, but I doubt he ever rides to work. Paul has become very much a Practical Cyclist, with the first of the Xtracycles among us and the willingness to ride big distances for visits, as when he rode from Cedar Rapids up to Saint Paul to work the bike races in June. I have become just a local cyclist, my riding nearly all in the cities, often with my children, rarely doing more than 30 miles in a day. The Atlantis's comfort is going to start stretching this out somewhat, but my mileage remains just a fraction of what these guys typically ride. There are many ways to enjoy cycling, that's one of the great things about it, and we've all taken different paths.
Posted by Matt at 8/04/2005 09:54:00 PM