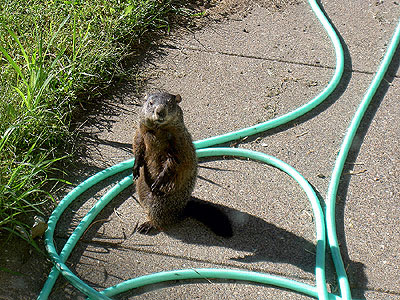 I think this is a groundhog. I was out in the garage working on changing my Yakima rack over from Subaru-sized to Avalon sized, an amazingly tedious and lengthy job, when I saw this fellow up by the house. He soon disappered down a hole by our back patio. I was able to get this photo of him out our kitchen window; I think he's a groundhog. Aren't gophers smaller? And beavers have flat tales, badgers are bigger with stripes, skunks stink, we've got squirrels and chipmunks already, but this is new fauna for us.

I think he's taking advantage of our cat's disability. She was a ruthless hunter, keeping the rabbit population well in check, the squirrels up the trees and the chipmunks at bay, then a month or so ago disappeared for eight days only to come dragging in at half her previous weight, an open wound on her leg and, the vet said, a broken hip socket like she'd been shot with a pellet gun, though there was no pellet there. Sophie's making a decent recovery but will never be the fast and skillful hunter she was previously and all of a sudden our yard is a Garden of Eden for the little critters. Squirrels are one thing, but this is getting ridiculous!

I did finally get the rack all done but it took hours. I had to go to wider bars on the Avalon (58" versus the Subaru/Saab 48") with new Q-clips, new bar spacing and now, capacity for four bikes, although one has to go on backwards. Jim in Oil is for Sissies noted a customer surprised at a $700 Yakima rack setup; I'm not surprised at all. You get into this stuff and you have enough invested you hate to abandon it, even though the 48" bars/rain gutter mounts/ski holders I first bought are no longer in use.

Geneva and I rode to our old church today, a mere 11.3 mile round trip. It was a beautiful day to ride (or squander hours fitting a Yakima rack). It's a nostaglic trip for me because when Henry first learned to ride a bicycle, on a Saturday, the following Wednesday night we rode to church, 5.5 miles one way. He plowed along down Pierce Butler on a small (but heavy!) red single speed Trek Mountain Lion, my little red-headed five-year-old, and just thought it was the greatest thing and was disappointed that he couldn't ride home in the dark. Now I ride the same route with my increasingly tall and lovely eleven-year-old daughter and she thinks riding with Dad is pretty terrific. Bikes are great for many things, low emissions, low oil consumption, less congestion, freedom, speed, sightseeing, transportation, but they also are a marvelous thing to do with your children.
Posted by Matt at 8/28/2005 09:53:00 PM

It's either a groundhog or a woodchuck. Wow, you got really close to that little guy.

Man, leave that poor cat inside. My wife works at an emergency veterinary clinic and has seen many cats end up like yours. We have eight (yes, 8) cats that are all inside cats. One was a semi-feral cat we rescued from a feral colony on the Outer Banks. Two others were rescued as kittens outside behind restaurants. Only one has been declawed (before we got him). All seem to get along. Having enough litter boxes and scratching posts helps. Anyhow, many of the cats she treats have been attacked by dogs or wildlife. Some disappear for a week or two, only to return home on death's door. If your cat can stay inside, you won't have this kind of trouble. Not to mention the vet bills!