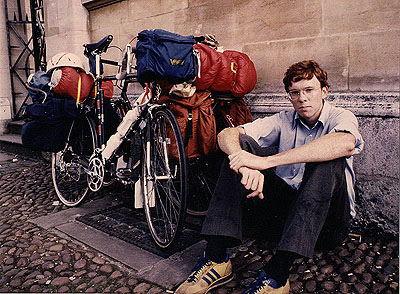 I don't know the precise date of this photo, but August 18, 1980, would be about right, as it's near the end of that trip and I was home by the 24th. This is me, with hair, with my Motobecane Grand Record in Oxford, laden with gear from a summer of biking and travelling around in the U.S. and the U.K. My buddy Holmes took this picture; that's his bike behind mine. Notable in this photo would be the Brooks Professional saddle, which I have on my Atlantis now, and the Phil Wood front hub, which Paul just built into a new front wheel and which also serves on the Atlantis. There's something satisfying about having 25- and 30-year old parts on the bike. When Henry and I rode to Baker Park in early July, I used the same panniers and sleeping bag from this photo as well. Notable also are the silk sew-ups (tubular tires) I rode that summer, 290g Clement Campionato del Mundo Setas. I even have fenders, English Bleumels ones in this case; they went on for this trip and I've had fenders on my bikes most of the time since. My thinking hadn't evolved far enough for me to have a kickstand yet, but one thing at a time!

Having an old pic like that is seriously cool. I'm gonna dig out the picture of me when I was 6 years old on my first 20 incher.

What a great photo. I don't know if you were an Angry Young Man, Matt, but you certainly look a little grumpy in this one.

What's this? No cycling specific clothing? What was breaking in the Brooks like in your Levi's?

I do look a bit surly in that photo but was then and remain generally pretty genial. I did have cycling shorts and a shirt with me and wore them on the big mileage days, and the shorts served double duty as swimming trunks. We had quickly discovered that bikes didn't cost extra on trains and so used British Rail to make miles and then the bikes to get around, so often wore regular clothes. I had four uncles running pubs at that time so it wasn't always intensive cycling! These Filson Whipcord pants (wool!) were my main trousers for the trip, and there is a pair of leather cycling shoes lashed onto the rack. The Brooks saddle is already five years old in this photo and was mostly broken in wearing cycling shorts.

Hi ##NAME##. I was looking for discount tires related information and came across your blog. Very good reading. I have a discount tires site. You'll find info on motorcycle and atv tires as well as most major brands of vehicle tires such as Michelin, Goodyear, BF Goodrich, Cooper and more. With winter here, you can also get tire chain and winter tire recommendations for your vehicle. Check it out when you can : )