I decided to go for a ride Wednesday night. Three things intrigued me; a crossing of Highway 280 from the west end of Roselawn to Broadway mentioned in a comment by another blogger (Nathan); a bike shop I hadn't been to called Behind Bars; and a bridge over the Mississippi I'd never even noticed known as Bridge Number 9.

So I set off, westbound down Roselawn right to the end. You can go from the end of Roselawn across into the left turn lane of Highway 280 and take a left onto Broadway. It looks like this (and, if you like Google Maps, like this): 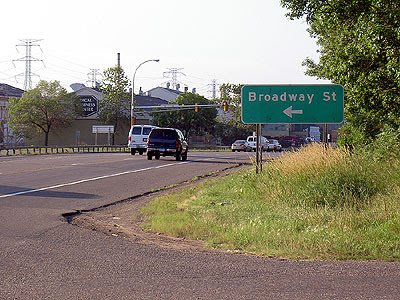 Highway 280 is a 55-mph limited access highway, not Interstate quality, but nearly as inhospitable. I waited for a big gap in northbound traffic and nipped across into the left turn lane to get onto Broadway. I got a red arrow in the lane so, not wishing to be thought a scofflaw, I waited. Luckily, My Friend The Car arrived behind me to trigger the light for me. I also noticed that there is a pedestrian crosswalk button on the east side even though there's no painted crosswalk or sidewalk along the highway. Here was my view. 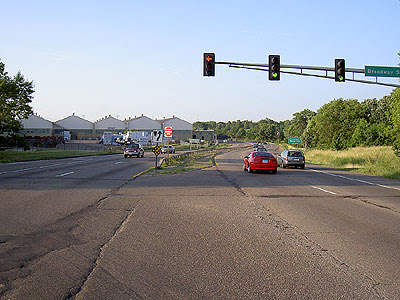 I rode off westbound on Broadway. It's not marked as a suggested bike route on the Twin Cities Bike Map and I can see why; it blows. It's four-lanes, but no shoulder, the pavement's in bad shape, there's shitloads of glass and hordes of UPS trucks trying to make it in by 7:00PM (I rode by the UPS hub at about 7:05). Once past UPS, things got a bit less frantic and I coasted on down the long hill, across Stinson and over I-35. You get squeezed down to one lane under some railroad tracks and traffic picks back up going up towards Central. I crossed Central and knew I was getting in the area of the Behind Bars bike shop. I took a wrong turn by some of Minneapolis's classic industry: 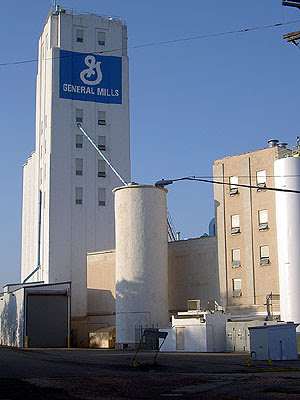 I wonder how many developers have driven by thinking, hmmm, that would make for some nice condos? For the moment, it's still in operation. Lots of charm, too, the streets are brick. Maybe one day when it's raining I'll come back and try some high speed turns on this to get a flavor of the European spring classics. In the meantime, I clattered back and forth up this street. There are some classic northeast Minneapolis eating establishments around, like this one on Broadway. 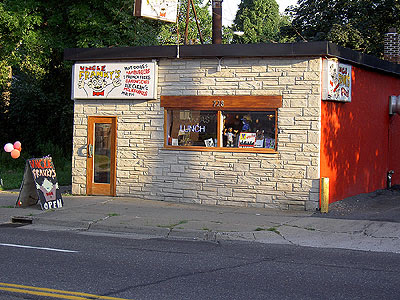 I've never actually eaten here, so this isn't an endorsement.

I rode on down to 208 13th Avenue NE and found Behind Bars. It was open! I went in and talked to Chuck, the guy who runs the place. He asked how I'd heard of them; I told him I'd read about him on a blog. He was interested in which one. I had to think and then look on his computer, but it was Bicyclo II. He took a look at it and said, oh yeah, Michael, I know him. We chatted for a while, interrupted by a couple of customers. I offered to take his picture outside the store, no such thing as bad publicity you know, just make sure you spell the name right, but he didn't want to do that. I instead took a photo of the store's name painted on an adjacent wall. 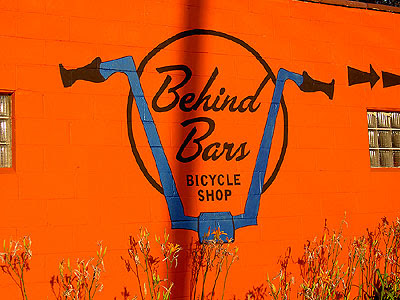 I rode on down past the old Grain Belt brewery and set off across the Broadway bridge over the Mississippi. I rode on the south sidewalk so I could see the view downriver, where you can see downtown Minneapolis and the Plymouth Avenue bridge. The bridge Henry and I took going to Baker Park a month ago is another couple of miles upstream from here. 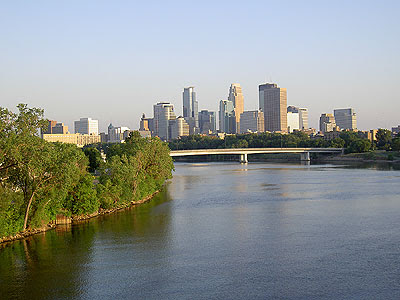 I wasn't interested in following Broadway any further west at the moment and instead set off down the West River Road. At Plymouth a bike trail arises on the east side of the road. I was at the red light eyeing this across the intersection; the WALK light was still on for cross-traffic; there was no cross-traffic; I looked around; I ran the light (shhh!). God, I'm embarassed. Still, it saved me a couple of minutes and the light didn't seem to be responding to me.

I rode down to downtown, past the Mill City Museum and the Guthrie Theatre Erection and under the I-35 bridge. About here the path diverges and loops up to the end of the Number 9 bridge. I rode over to it. There's a historical marker.

The bridge was built by the railroads back in the 1920s when some pretty mainline tracks still ran right through campus. I guess it was used until 1986, then sat abandoned for several years, only to reopen as a sidewalk and bike bridge in 2000. This is odd; we had lived here for several years by then and I have no recollection of this happening. I didn't even realize this bridge was here, partly because it sits at a lower level than the Interstate and Cedar Avenue/10th Street bridges nearby (here's the Google Map of this one).

I rode out onto the bridge. Downstream was a good view of the Washington Avenue bridge. 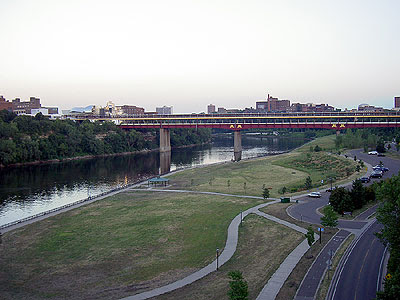 That bridge has terrific integration into the University's traffic patterns; the Number 9 bridge is a bit of an orphan at the moment, although I gather that there is a plan to connect it to the Intercampus Transitway, even after the Transitway may get disrupted by a hoped-for new U of M football stadium. Don't get me started.

North from the bridge you can see downtown in the distance. The West River bike paths are visible in the lower left. 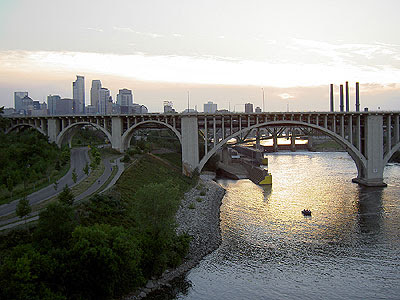 There was a boat on the Mississippi below the Saint Anthony locks. This is north from the Number 9 bridge. 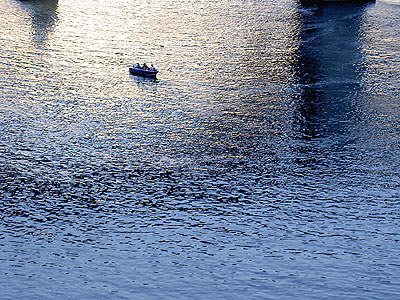 This is a more cluttered view north. You can see the Lower Saint Anthony lock and dam, the SE 10th/Cedar Avenue Bridge (the nice white one with a cyclist on it), the Interstate 35 bridge (the girders in the background), the Stone Arch Bridge and the upper Saint Anthony dam. Just last weekend I was at the Twin Cities Model Railroad Museum in Bandana Square and was looking at old photos of the Twin Cities on the walls. There was one of this very area, when the flat green space along the river was cluttered with small houses in a neighborhood called Bohemian Flats and there was a dense net of railways and a lot more industry along the west bank. It's a cool museum and worth a visit. Anyway, here's the bridges. 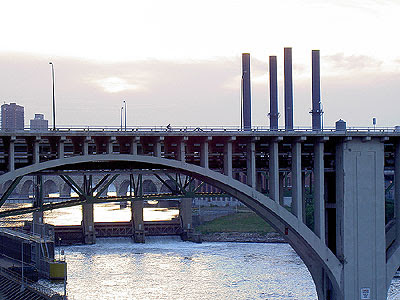 I rode on across. You take a hard right and go up a short hill to the East Bank of the University of Minnesota campus. I rode slowly across campus, full of the happy buzz of a summer evening on a quiet campus, sharing the sidewalk with a couple of parents escorting young students on Orientation. I can remember my first orientation visit to Iowa State thirty years ago, and how it all seemed pretty big and grown up. I went up to the Intercampus Transitway, my new favorite bike highway, and rode home, stopping at a convenience store for a Gatorade on this sweaty evening. Also at the convenience store were a couple of Bike Patrol security guys, also getting drinks, who then rode off down the Transitway on their mountain bikes. I guess it is patrolled. I went on home, lights showing (wouldn't want to be a scofflaw) and ended up with 18.7 miles at 12.4 mph. That's faster than my usual Bicycle Based Photography outings, but that desolate stretch of Broadway must have sped things up.

I probably won't use Broadway much. If I'm going downtown, Como Avenue or the Transitway are much better alternatives. If I'm going north, I'll take a couple of hundred yards of Larpenteur and then onto Industrial Boulevard instead. Still, you never know until you try it.
Posted by Matt at 8/05/2005 11:42:00 PM

Another great post, Matt! This one got me thinking about my commute routes - check it out.

It may feel like no one reads this, but some of us do. I gave up doing my blog for that reason and now I just post on other peoples.